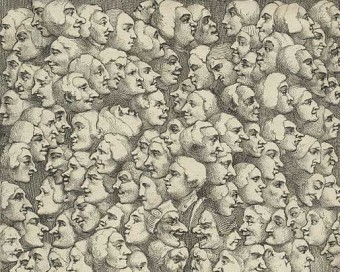 Once thought to be incredibly rare, with only 100 or so documented cases up until the last decade or so, it’s now thought that around 1 in every 50 people suffers from this condition; though for most, they just have a really hard time recognizing people by their faces. For instance, in one study, a person with this condition was shown a picture of Elvis Presley and thought it was Brooke Shields.

For some, the condition is so severe that they can’t even recognize their own face, let alone someone else’s. There are also instances of people with prosopagnosia who are unable to tell whether what they are looking at is a face at all or simply a picture of an oddly shaped rock or just random objects.

To be clear, face blindness isn’t a problem with the people’s ability to see, nor do people with this condition have memory problems. They just can’t, or have difficulty with, recognizing faces.  Specifically, when most people see faces, their brain processes the face as a whole, rather than by its individual parts.  For people with prosopagnosia, they see the individual parts, but are not capable of perceiving the face holistically, making it incredibly difficult to recognize someone by their face.

It turns out that there is a special part of our brain that has facilities for “seeing” faces and recognizing them later.  This shouldn’t be too surprising as most people know from experience that when they see people from other racial backgrounds they aren’t very familiar with, there is often that politically incorrect thought, “They all look the same.”  However, if you spend time around a lot of people in that other race, you’ll quickly find that your brain begins to be able to distinguish between people that not long before you thought all looked the same.  Once this happens, you’ll easily and quickly be able to distinguish between such people and might well wonder how on Earth you used to think that people of that ethnicity “all looked the same”.  This hints at the fact that there must be some facility in your brain that trains itself to recognize certain types of faces and, once trained within a culture, makes these distinctions much more readily.  Now, this preceding example doesn’t definitively demonstrate that there is indeed a specific part of the brain that handles processing faces.  But, it turns out, that is the case. 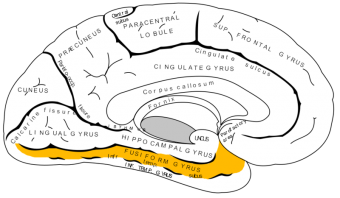 The part of the brain that’s thought to not function properly in the cases of prosopagnosia is known as the fusiform gyrus,  This handles things like visual word recognition, color processing, and face and body recognition, among other things. This system of the brain allows people to more readily distinguish faces than they would, say, one rock from another rock, or other similarly complex inanimate objects.

For people with prosopagnosia, they rely more on the brain’s facilities of object recognition, which takes much more training to distinguish one similar looking object from another.  This more generic object recognition system is how an arborist can instantly recognize what tree a leaf came from, even if it’s extremely similar to another leaf from a different type of tree.  They can do this through significant training. Similarly, a geologist can recognize what type of rock something is even if it strongly resembles a different type of rock- again, they can do this only after quite a bit of experience and training.  For most people, we simply learn faces quickly and easily without conscious thought using the special “facial recognition” mechanism of the brain designated for this, rather than relying on the generic object recognition system.

It was thought until relatively recently, that most people with this condition came by it simply from damage to their brain (via strokes, tumors, severe head injuries, etc.).  But more recently, it’s been discovered this isn’t the case at all and far more people suffer from prosopagnosia from birth, though most have it mildly enough that they can adequately compensate by doing things such as paying particular attention to a person’s hairstyle, body shape, posture, voice, etc.

Another trick often used by people with prosopagnosia to compensate, not in recognizing people, but in at least not appearing rude, is to adopt the practice of always looking down when walking, so that they can act like they don’t see people, in case they come across someone they know, but don’t recognize.  When they do encounter someone, many on the more extreme side often adopt the practice of being overly friendly to everyone, in case the person they are talking to isn’t a stranger.  In the course of the conversation, they try to determine whether it’s someone they actually know or not and who the person is.  How clever people are at naturally masking face blindness is “probably why [the disorder] went unnoticed for so long,” says Dr. Thomas Grüter of the Institute of Human Genetics.

As one woman with this condition, Cecilia Burman, said, “People think I’m just snobby… It makes me really, really sad to lose new friends because they think I couldn’t bother to say hello.”  Burman’s fairly low on the spectrum in that she has trouble recognizing her own mother’s face and even has difficulty recognizing her own face in pictures or the mirror.

The problem isn’t just about saying “hello”, though.  Not surprisingly, people with face blindness also tend to have problems interpreting facial expressions.  This can make it difficult at times to properly gauge a person’s mood or the like, which can further make someone with face blindness seem insensitive or misinterpret what someone’s saying.

You can take a couple simple online quizzes to help assess whether you might be someone who suffers from face blindness (found here: Vision, Memory, and Face Recognition Online which will compare your results with the results of people who score normally on facial recognition.)

In the end, there is no known cure for prosopagnosia and treatment options have proven fairly ineffective to date.  The primary way to treat the condition is simply to teach people to pay attention to things like hair style and color, body types, etc. to help recognize people.  As most born with this condition already do this naturally, there really isn’t a whole lot in the way of actual treatment that can help them… yet.