What’s in a Hot Dog and How Is It Made?

July 1, 2014 Melissa
Kayla R. asks: What are hot dogs made of really? I was also wondering how they are made? Thanks! 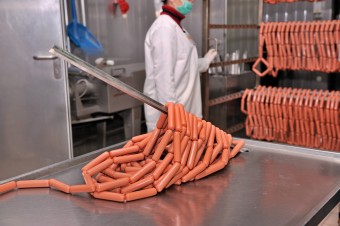 After the steaks, chops, breasts, ribs, thighs, hams, tenderloins and briskets are removed, there’s a fair amount of gristle, fat and offal remaining on a butchered animal, and early on, people realized this could be put to good use. One of these products is the hot dog, a classic of pre-cooked, processed meat.

Because of the butchering process, the leftovers used in products like hot dogs often have a fair amount of bacteria, and so pre-cooking helps eliminate that. In addition, pre-cooking has the added benefit of helping to separate the remaining muscle meat, fat and connective tissues from the head and feet bones. Cooking also makes the trimmings more manageable.

Because of the different sizes and types of carcasses, there are different pre-cooking times for different animals (and different parts), although it typically occurs within the range of 150 to 190 degrees Fahrenheit.

Like many other products, such as bologna and liver sausage, hot dogs and frankfurters are created by “meat emulsion,” although as the FAO notes, “meat batter” might be a more accurate term.

Higher quality products are made from top quality meats and no chemicals. Examples include kosher, all beef hot dogs that have no by-products, fillers or artificial colors or flavors.

Less expensive types of hot dogs will have chemicals, fats and water binding agents added, and for many of these, the production process is simple:

First pork and/or beef trimmings are ground up in a machine and then extruded through a metal sieve-like device so they resemble ground hamburger meat. At this point, ground chicken trimmings (if any) are added, and together, the mixture is blended (emulsified) until it looks like the aforementioned meat batter.

Now salt, ground spices and food starches (if you made this at home, you might use bread crumbs, flour or oatmeal) are added, along with some water and corn syrup or another sweetener. Toward the end of the process, more water is added, to get the batter to the proper consistency (no one wants a dry wiener).

The batter is “pureed again [and] the excess air is vacuumed out.” Next the emulsified meat is pumped into casings (usually cellulose but sometimes natural), and the strings of dogs are hung on racks and fully cooked in a smoke house. Sometimes hardwood smoke is added. Later, the dogs are showered in cold, salted water, and then, if cellulose casings were used, put through a peeler to remove the casings (natural casings are left on).

Remember, “natural casings” means the intestine of an animal that have been thoroughly cleaned and processed.

Finally, finished dogs are inspected by hand, and only “flawless” tubed meat is routed to yet another machine where the dogs are grouped for packing.