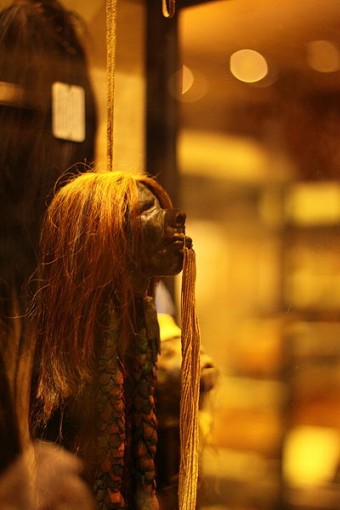 Today I found out how shrunken heads were made.

For those who don’t know what I’m talking about, a shrunken head is a decapitated human head that is shrunk through a cooking process by members of the Jivaroan tribes of the northwestern region of the Amazon rain forest in Ecuador and Peru.

Why do this? Tribal members believed in the existence of a vengeful spirit, called muisak, that inhabits the human body. To block a muisak from using its powers when a person is murdered, and to gain control over the soul of the victim, headhunters severed their enemies’ heads and shrank them, calling them “tsantsas”. Removing the head from the body of an enemy also showed ancestors the warrior had properly fulfilled the obligation to his lineage in taking blood revenge. In addition, it served as a warning to enemies that the Jivaroan tribes were skillful warriors.

During battles with other tribes, headhunter warriors would kill the enemy and decapitate them, or sometimes even decapitate them while still alive. Once the head was off, the warrior’s headband was put through the mouth and neck hole and tied over his shoulder for easy carrying when evacuating the village following an attack.

The process of “shrinking” the head happened a couple ways. Sometimes it would start immediately and take approximately one week with warriors working on it while traveling back to their home village. In this case, upon completing a raid, warriors would meet somewhere a safe distance from the victimized village and start their work by making a slit in the neck and up the back of the severed heads. This allowed the skin and hair to be peeled away from the skull, the latter of which would then be discarded as an offering to the pani, or anaconda, which the tribes considered to be a spirit helper.

In other cases, if no long traveling was needed to get home, a week-long festival of eating and drinking occurred back at the warrior’s village while the shrinking heads were being boiled.

As to the specific process of shrinking the heads, to start the shrinking process, the eyelids on the severed heads were sewn shut and the lips skewered closed with wooden pegs. Next, the head was simmered for about an hour and a half to two hours in a large boiling pot, which is how the actual “shrinking” took place. This was a very precise process as simmering the head too long would cause it to lose its hair, but not long enough would leave it gooey. (Nobody wants a gooey shrunken head.  That’s just gross…) 😉

Once removed from the pot, the head would be about 1/3 its original size and the skin dark and rubbery. The skin would then be turned inside out and any leftover flesh scraped off with a knife. The scraped skin was then turned with the proper side out again and the slit in the rear sewn together. The process wasn’t done yet. The head was shrunk even further by inserting hot stones and sand to make it contract from the inside. This also “tanned” the inside, like tanning an animal hide, in order to preserve it.

Once the head reached the desired size and was full of small stones and sand, more hot stones would be applied to the outside of the face to seal and shape the features. The skin was rubbed with charcoal ash to darken it, and as tribesmen believed, to keep the avenging soul from seeping out. The finished product was hung over a fire to harden and blacken, then the wooden pegs in the lips pulled out and replaced with string to lash them together.

The last step involved making a hole in the top of the head and inserting sticks or string, so it could be worn around the warrior’s neck as a trophy. After the heads were complete, they were presented to the other villagers as a sign of victory and a series of feasts and rituals followed to celebrate.

Surprisingly, despite the amount of preparation that went into shrunken head making, they were often discarded immediately following the final celebration. Initially, they were fed to animals or given to children as toys, but as the heads were discovered by fascinated tourists and collectors, tribes began to trade them instead of destroying them.

Westerners began buying up shrunken heads in the late 1800s and early 1900s, causing the tribes to increase their rate of killing in order to supply heads for trade. Guns were the usual currency traded for the heads, but knives were also popular. Demand for shrunken heads became so great that counterfeits became common.  These were often made from the heads of monkeys and sometimes from heads obtained from morgues. In fact, there is speculation that about 80 percent of shrunken heads in private collections and museums were made this way.

The Peruvian and Ecuadorian governments outlawed trafficking in shrunken heads in the 1930s to discourage killing for this purpose.  Thanks to the influx of Western culture and religion, the practice of making these shrunken heads has since declined dramatically.  It is generally thought that no new authentic tsantsas have been made in at least the last two decades, if not more.