This Day in History: July 14th 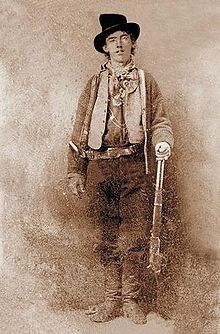 On July 14, 1881, one of the Old West’s best known and yet most misunderstood outlaws was gunned down by an ambush when he walked into a dark bedroom. His death led to a mythological legend based half in fact, half in fancy.

Most accounts state that Billy the Kid was born on New York City’s Irish East side as William Henry McCarty, Jr. on November 23, 1859. By the 1870s his family had moved to the southwest, and his mother died of consumption in September of 1874. Motherless and with a stepfather uninterested in his welfare, Billy did what he could to get by. He ran afoul of the law for stealing laundry and the local sheriff jailed him for a few days just to scare him, but he managed to escape.

Sixteen-year-old Billy relocated to Arizona and found work as a ranch hand. One day at a local watering hole, he got into a tussle with a bully named Frank “Windy” Cahill, who had been a thorn in his side many times before. Billy was a small fella, about 5’8 and 140 pounds soaking wet, so when Cahill slammed him to the ground and started punching him in the face there was little Billy could do in way of retaliation aside from grabbing his revolver and firing it into Cahill’s stomach. Billy didn’t stick around to face the murder charges, and headed back to New Mexico.

This is when Billy, who was now called “The Kid” by his friends, got caught up in the Lincoln County War, a feud between two ranchers, one already in the area (Dolan), and one wanting to set up shop (Tunstall). Tunstall tried to achieve his goals through the proper legal channels, but the local lawmen were crooked and biased, especially against any newcomers. So Tunstall did as Dolan did and hired his own gunslingers. It didn’t take long for things to get out of hand.

Tunstall was murdered by Sheriff Brady’s men. Tunstall’s men, now calling themselves the Regulators, got their revenge by killing Bill Morton, Frank Baker and William McCloskey. Then they set up an ambush for Sheriff Brady and his deputy George Hindman. Warrants for the Regulators’ arrests were immediately put out.

The Kid was on the run. He contacted the governor and told him he’d testify against the Dolan side if the murder charges against him were dropped. The Governor promised The Kid a full pardon. Billy testified in court, but to his chagrin discovered the same shady politicians that caused the Lincoln County War in the first place could very well negate the governor’s pardon. So he escaped, and went back to rustling.

Billy spent the next two years living in or in the vicinity of Fort Sumner. During one incident a local posse had surrounded The Kid and his gang, and during the course of the stand-off the posse shot and killed their own deputy, James Carlyle. His death was, of course, credited to Billy the Kid.

As Billy continued to dodge the law, Pat Garrett was elected sheriff and also made U.S. Marshall. He was in hot pursuit of Billy the Kid, and killed two of his closest friends, Tom O’Folliard and Charlie Bowdre, during the search. Finally, after a brief stand-off, Garrett captured The Kid on December 23, 1880.

After being put on trial, Billy the Kid was sentenced to hang. On April 28, 1881, he made his last – and most amazing – escape. He slipped a hand out of the cuffs and beaned a deputy over the head with the restraints. Billy told him to put up his hands, but he started to run, so The Kid shot him. The other guard came running from across the street when he heard the commotion, and Billy shot him too.

Billy the Kid was back on the run again.

On July 14, 1881, just before midnight, Billy the Kid arrived at Pete Maxwell’s ranch where he often stayed. Accounts of what happened next differ somewhat, but the general story is that he noticed Sheriff Pat Garrett’s deputies lurking on the porch, and backed into Pete’s room, asking, “Pete, who are those fellows outside?” The Kid had just enough time to notice Garrett’s silhouette and ask “Who’s there?” before a bullet dealt a fatal blow.