Is Cannibalism Unhealthy or Just Awful?

July 28, 2014 Melissa
Mark K. asks: I was just wondering if a human ate another human in an apocalyptic scenario or something would this be unhealthy or just awful and gross? 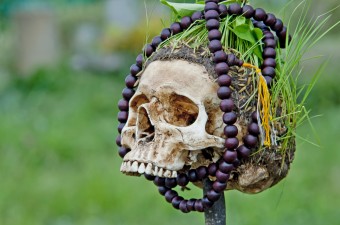 Depending on what parts are eaten (the most infected include the brain, spinal cord, bone marrow and small intestine), human cannibals run the risk of contracting a fatal prion malady, similar to Creutzfeld-Jacob disease (think Mad Cow), known as kuru.

First discovered among the Fore people of the Eastern Highlands of Papua New Guinea, kuru (“shaking death”) was contracted when people (mostly women) consumed their dead as part of a funereal ritual of respect and mourning (transumption).

The Fore believed that a person’s spirit could not be free until his body was consumed. So when a family member died, she was ritualistically cooked and then eaten, mostly by women and the children they fed. As part of the ritual, every part of the body, with the exception of the bitter gall bladder, was consumed.

Not all prions are bad, but some develop an abnormality in their shapes. As these abnormal prions from the infected deceased worked their way into their new victim’s brains, they caused great destruction due to their ability to make other proteins conform to their same, abnormal shape. These conformed proteins aggregate in sponge-like clumps that prevent brain cells from functioning properly.

When the disease strikes, a variety of symptoms can be displayed including loss of coordination (to the point of appearing drunk), uncontrollable trembling, rictus and unresponsive paralysis. Ultimately victims either suffocate or starve to death as their internal organs also become paralyzed. From first appearance to death typically takes only 6 to 12 months.

Over two decades spanning the late 1950s to 1970s, the Fore suffered an epidemic of kuru with over 2,500 people, mostly women and children, succumbing to the disease.

Remarkably, although the practice of transumption among the Fore ended (for the most part) shortly after Australian authorities outlawed it in the mid-1950s, people continued to contract, and die from, kuru even into the 21st century. This has led some scientists to conclude that kuru may have a 50-year incubation period.

Other than kuru, I could find no evidence of cannibals suffering from any other illnesses (setting aside potential mental health) as a result of eating human flesh. This includes no record of physical illness in anyone from the infamous Donner party, the 1972 Andean plane crash memorialized in the book Alive, or any of the modern day cannibals described below.

Although cannibalism is brutal by its nature, not everyone who is attacked by cannibals dies, and one victim lived to tell her tale:

Soldiers marched into her home carrying machetes and told her . . . “Today we are going to cut off your arm” . . . “They cut off my arm . . . cooked it, while they were drinking our . . . beer, and ate it with the rest of the beans and rice . . . They told me they were going to find my husband and eat his heart.

During the worst of the Ituri Conflict in the Democratic Republic of Congo (1999-2003), rebel groups used cannibalism as a way to get their fighters to “cross a psychological line, making them more willing to follow orders that would otherwise be unthinkable.” With the added benefit of intimidating the civilian population and striking terror in their enemies, they saw it as a win-win. Over the past decade, the International Criminal Court has been holding hearings and trials, in an effort to try their leaders for war crimes.

Worse still is the story of General Butt Naked, a Liberian warlord-priest who killed and consumed his first person, as part of a devil-worshiping ritual sacrifice, at the age of 11 in 1982. Over the next 14 years, he led an army of (mostly) naked child soldiers (they wore boots) and flamed the fans of Liberia’s civil war. Before each battle, General Butt Naked would choose, kill and consume a child, the sacrifice of which he and his brigade believed gave them strength, and “purified them for battle.” Luckily for those around him, in July 1996, General Butt Naked saw Jesus in a blinding vision, converted to Christianity, and today lives as a Christian preacher.  (You can read more about General Butt Naked here.)

In 2001, Armin Meiwes of Rotenburg, Germany, placed an ad seeking “young, well-built men aged 18-30 to slaughter.” Remarkably, the ad was answered, and Bernd Jürgen cooperated with Meiwes, while the latter cut off his penis and cooked it for the two to eat together (we know this because the entire scene was filmed). While Jürgen was bleeding to death, he was also filmed telling Meiwes, “If I’m still alive tomorrow morning, we’ll eat my balls.” After initial legal obstacles, such as the victim’s consent, prosecutors were able to successfully convict Meiwes of murder in 2006.

In July 2014, the former New York City police officer and so-called “cannibal cop,” Gilberto Valle, was freed on bond after his conviction for conspiracy to kidnap, kill and eat his estranged wife and other women was overturned due to lack of evidence. That lack of evidence included testimony that he had intended to eat women, for instance after roasting one alive over an open fire and boiling another down and placing her on a platter with an apple in her mouth. After overturning the conviction, the U.S. District Court Judge Paul Gardephe stated that, while gruesome, the evidence at hand amounted to nothing more than “fantasy role-play.” His attorney stated, “We don’t put people in jail for their thoughts. We are not the thought police.”