This Day in History: May 30th 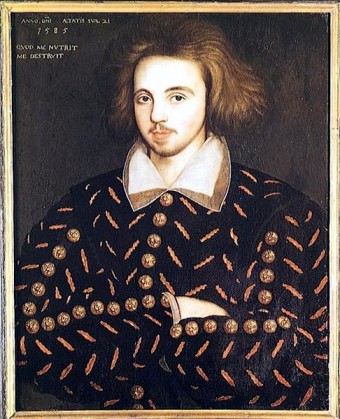 The Bad Boy of Elizabethan England, playwright Christopher Marlowe, was stabbed in a tavern and died on this day in 1593. The story goes that Marlowe was killed in an altercation involving a bar tab, but extenuating circumstances would suggest that other factors may have been involved in the writer’s untimely demise at age 29.

Christopher Marlowe was born in Canterbury, England in 1564. A bright student, he had no trouble earning a Bachelor of Arts degree from Corpus Christi College, Cambridge in 1580, but three years later the college dragged its feet awarding him a Master’s degree, perhaps due to his frequent absences.

These concerns were set to rest when the Privy Council contacted Cambridge and assured the college that Marlowe was working “on matters touching the benefit of his country.” Chris got his degree, and everyone began guessing just what kind of work he was doing that allowed him to live as lavishly as he did. Most speculated that Marlowe was a secret agent for Sir Francis Walsingham’s intelligence service.

Even with all this intrigue, Marlowe managed to write for the London theater starting in 1587, crafting the blank verse plays that would provide inspiration for another fledgling playwright named William Shakespeare. He produced only a handful of plays, but all became highly influential. “The Tragicall History of the Life and Death of Doctor Faustus” still stands as one of the world’s best known and controversial literary masterpieces.

Gossip didn’t just center on Marlowe’s reputation as a supposed spy. Rumors also circulated that he was a homosexual, a brawler, a counterfeiter, a magician and an atheist. It was the last charge that got him in trouble when he was arrested for the crime of atheism on May 20, 1593. Considering how serious this accusation was – if found guilty the punishment was to be burned at the stake – it was remarkable that Marlowe was not imprisoned. Instead, he was ordered to appear daily before an officer of the court.

Then on May 30, 1593, Christopher Marlowe was killed by Ingram Frizer. Marlowe had spent all day in the company of Frizer and two other men, Nicholas Skeres and Robert Poley. All of them were linked to the Walsinghams, either Sir Francis or another family member involved in the spy biz. Marlowe and Frizer got into a heated argument over the bar bill, and Marlowe ended up stabbed over the eye and in an unmarked grave.

Not so fast! Some believe it’s just too much of a coincidence that Marlowe had just been charged with heresy – but not jailed – and ended up dead just days later. And at the hands of a Walsingham toadie no less? Perhaps an issue with the Privy Council came back to haunt Marlowe? Being a spy isn’t the safest gig in the world, after all.

Some theorize that Marlowe’s death was faked to spare him the horror of being tried and executed for atheism, though many believe his purported atheism was nothing more than a pretense to further his success as a spy.

Everything about Christopher Marlowe’s life and death is shrouded in mystery and myth. A rock star before rock stars even existed, Marlowe was the Jim Morrison of his time, brilliant, unpredictable and then just – gone.