This Day in History: May 29th 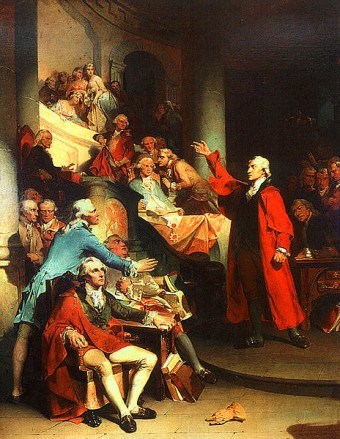 Patrick Henry was a lawyer, orator and statesmen whose career, mostly in the service of the state of Virginia, spanned from the earliest calls for independence through the founding of the United States of America. He’s probably best known for his “give me liberty, or give me death” speech delivered a decade later, but it was his opposition to the Stamp Act that led his contemporaries to recognize him as “the man who gave the first impulse to the ball of revolution.”

Things escalated quickly after Henry was elected to the House of Burgesses by his neighbors in Louisa County, Virginia. He was already the House’s most anti-British member when he was sworn in on May 20, 1765, but just a few weeks later when word reached Williamsburg that Parliament had passed the Stamp Act, Henry became even more radical in his views.

The Stamp Act required specific stamped paper be purchased for virtually everything printed in America, with prices varying based on what the paper was for: legal documents, newspapers, pamphlets, playing cards – you name it. The colonists, who had long felt their tax burden was unduly high, were growing weary of being nothing but a source of revenue for the mother country.

Virginia’s leaders were all opposed to the Stamp Act. What they couldn’t agree on was how to act on that opposition. During a passionate debate in the House of Burgesses on May 29, 1765, Patrick Henry, never one to beat around the bush, compared King George III to Julius Caesar and Charles I, saying he might “profit by their example.” When the speaker cried “treason!” at this remark, Henry, not skipping a beat, quipped, “If this be treason, make the most of it.”

Patrick Henry had drawn up seven resolutions against the Stamp Act, each more inflammatory than the one preceding it. The first five were introduced during the debate in the House of Burgesses. The fifth was rescinded the next day due to pressure from the Royal Governor and the Council, and the Governor made it his business to keep the first four resolutions from being published in the Virginia Gazette.

Despite this desperate attempt at suppressing the Virginia legislature’s denunciation of the Stamp Act, within a few short weeks all seven of Henry’s resolutions were published in the other colonies, feeding the flames of rejecting Parliamentary rule while also inspiring them to consider the ramifications of a revolution.

It would seem Henry himself understood the importance of his Stamp Act Resolutions. He left a message for posterity along with his Last Will and Testament that read:

The alarm spread throughout America with astonishing quickness, and . . . the great point of resistance to British taxation was universally established in the colonies. This brought on the war which finally separated the two countries and gave independence to ours.