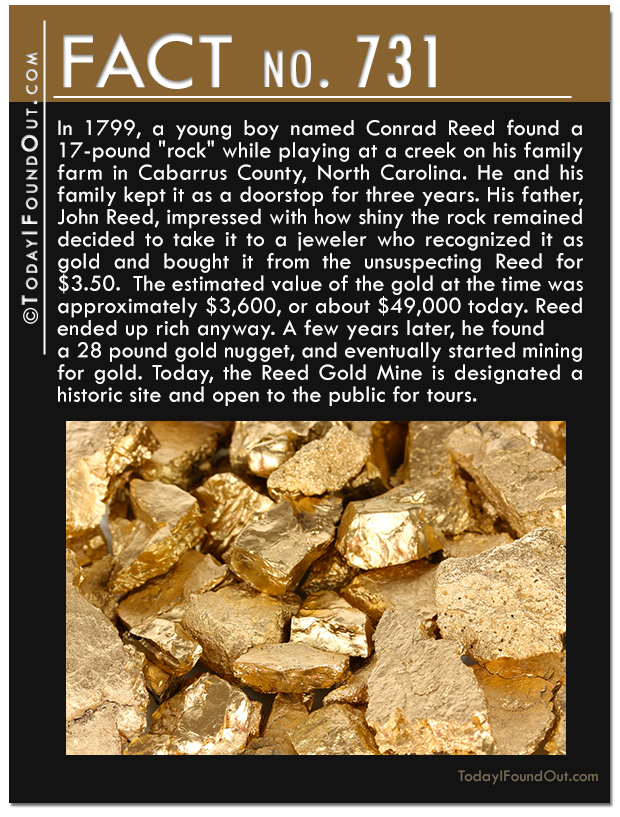 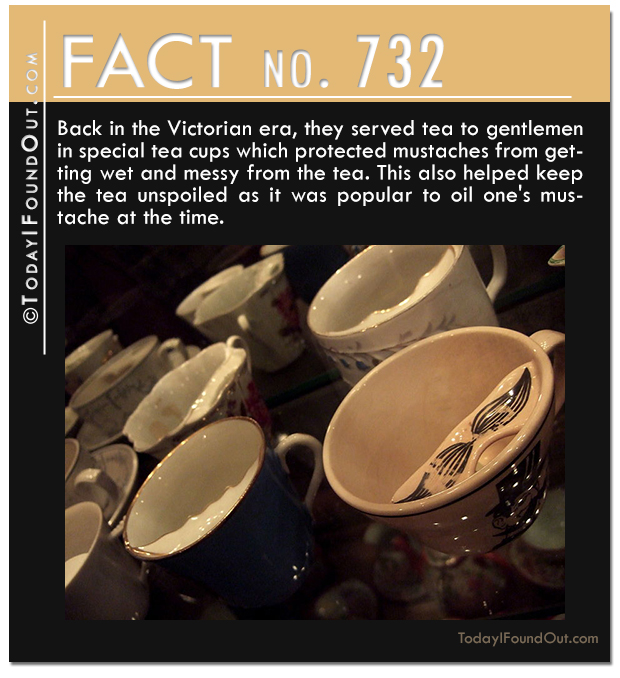 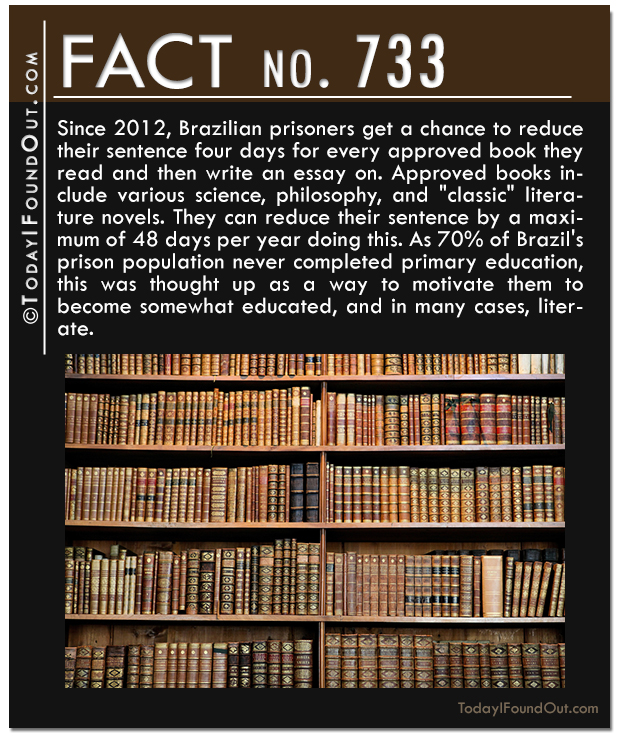 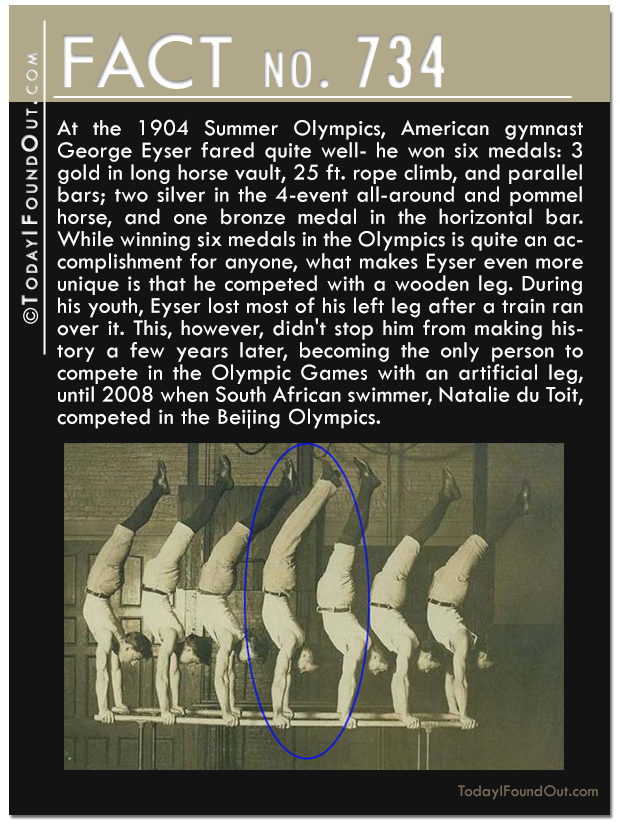 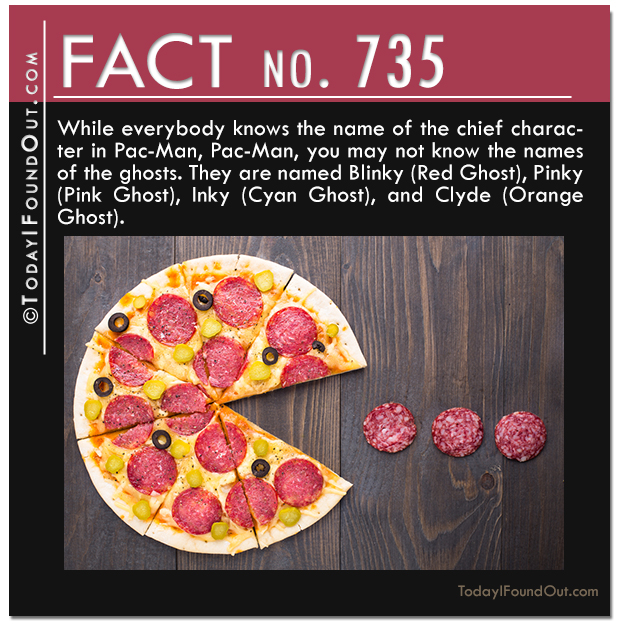 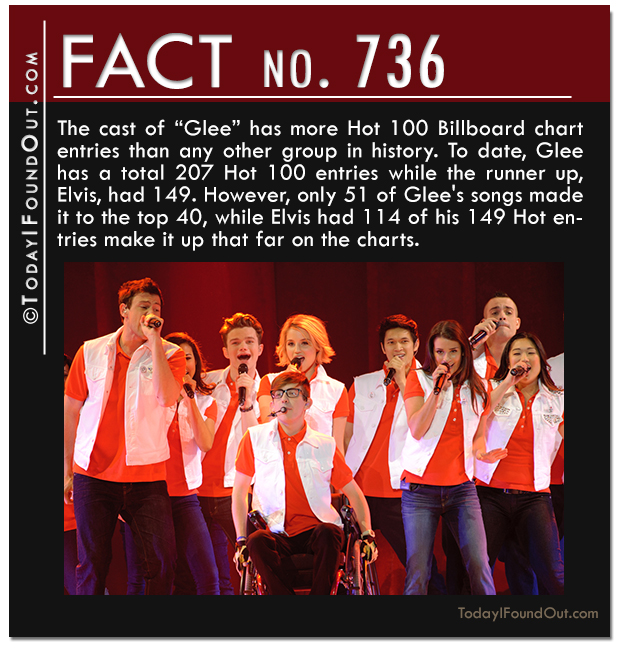 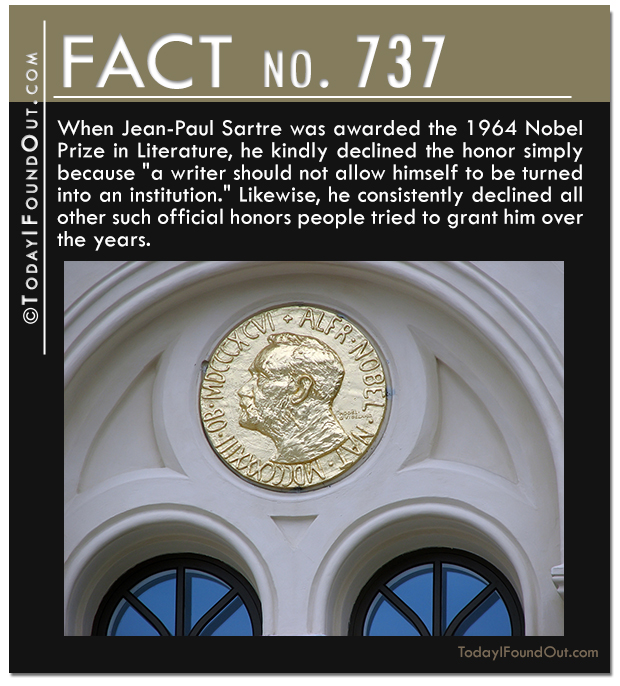 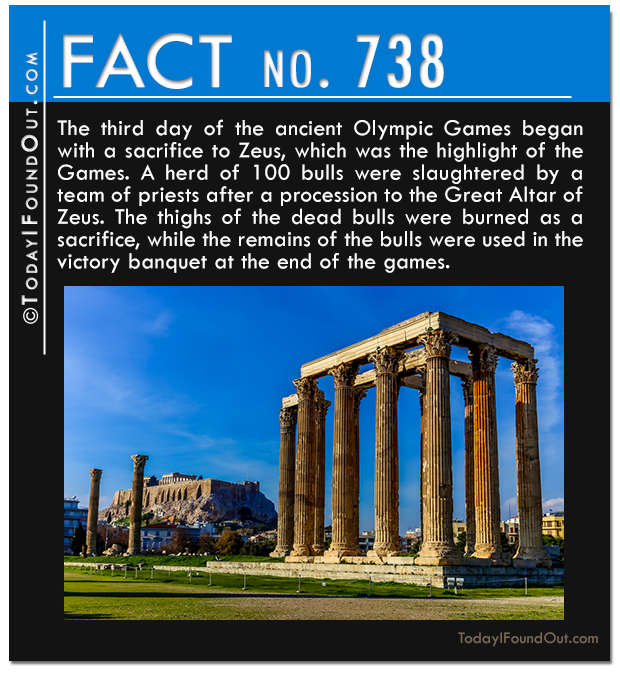 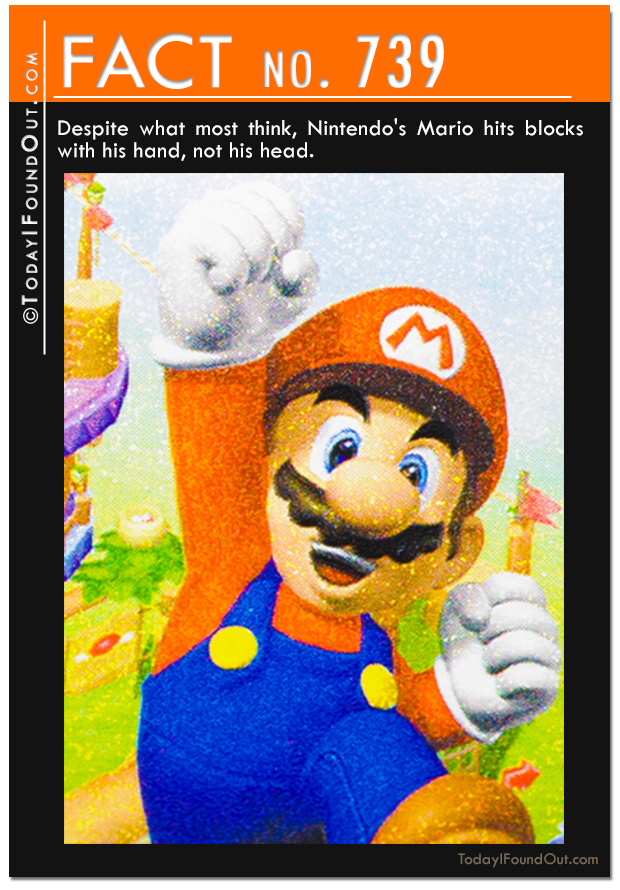 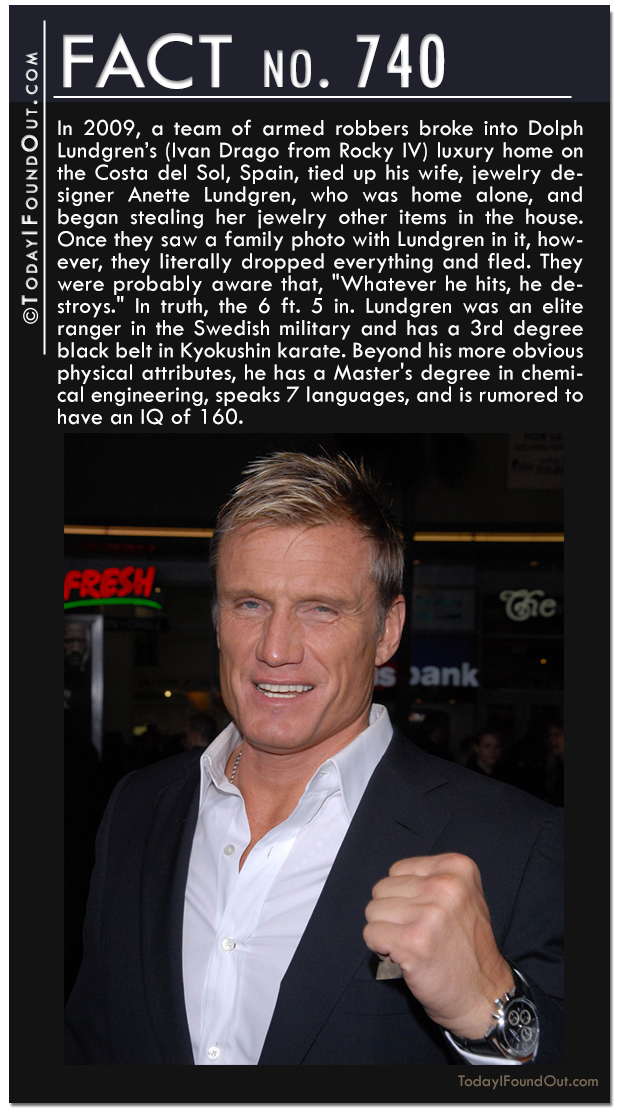 731: In 1799, a young boy named Conrad Reed found a 17-pound “rock” while playing at a creek on his family farm in Cabarrus County, North Carolina. He and his family kept it as a doorstop for three years. His father, John Reed, impressed with how shiny the rock remained decided to take it to a jeweler who recognized it as gold and bought it from the unsuspecting Reed for only $3.50. The estimated value of the gold at the time was approximately $3,600, or about $49,000 today. Reed ended up rich anyway. A few years later, he found a 28 pound gold nugget, and eventually started mining for gold. Today, the Reed Gold Mine is designated a historic site and open to the public for tours.

732: Back in the Victorian era, they served tea to gentlemen in special tea cups which protected mustaches from getting wet and messy from the tea. This also helped keep the tea unspoiled as it was popular to oil one’s mustache at the time.

733: Since 2012, Brazilian prisoners get a chance to reduce their sentence four days for every approved book they read and then write an essay on. Approved books include various science, philosophy, and “classic” literature novels. They can reduce their sentence by a maximum of 48 days per year doing this. As 70% of Brazil’s prison population never completed primary education, this was thought up as a way to motivate them to become somewhat educated, and in many cases, literate.

734: At the 1904 Summer Olympics, American gymnast George Eyser fared quite well- he won six medals: 3 gold in long horse vault, 25 ft. rope climb, and parallel bars; two silver in the 4-event all-around and pommel horse, and one bronze medal in the horizontal bar. While winning six medals in the Olympics is quite an accomplishment for anyone, what makes Eyser even more unique is that he competed with a wooden leg. During his youth, Eyser lost most of his left leg after a train ran over it. This, however, didn’t stop him from making history a few years later, becoming the only person to compete in the Olympic Games with an artificial leg, until 2008 when South African swimmer, Natalie du Toit, competed in the Beijing Olympics.

735: While everybody knows the name of the chief character in Pac-Man, Pac-Man, you may not know the names of the ghosts. They are named Blinky (Red Ghost), Pinky (Pink Ghost), Inky (Cyan Ghost), and Clyde (Orange Ghost).

737: When Jean-Paul Sartre was awarded the 1964 Nobel Prize in Literature, he kindly declined the honor simply because “a writer should not allow himself to be turned into an institution.” Likewise, he consistently declined all other such official honors people tried to grant him over the years.

738: The third day of the ancient Olympic Games began with a sacrifice to Zeus, which was the highlight of the Games. A herd of 100 bulls were slaughtered by a team of priests after a procession to the Great Altar of Zeus. The thighs of the dead bulls were burned as a sacrifice, while the remains of the bulls were used in the victory banquet at the end of the games.

739: Despite what most think, Nintendo’s Mario hits blocks with his hand, not his head.

740: In 2009, a team of armed robbers broke into Dolph Lundgren’s (Ivan Drago from Rocky IV) luxury home on the Costa del Sol, Spain, tied up his wife, jewelry designer Anette Lundgren, who was home alone, and began stealing her jewelry other items in the house. Once they saw a family photo with Lundgren in it, however, they literally dropped everything and fled. They were probably aware that, “Whatever he hits, he destroys.” In truth, the 6 ft. 5 in. Lundgren was an elite ranger in the Swedish military and has a 3rd degree black belt in Kyokushin karate. Beyond his more obvious physical attributes, he has a Master’s degree in chemical engineering, speaks 7 languages, and is rumored to have an IQ of 160.