April 17, 2014 Melissa
Jesse asks: What will happen when the earth’s magnetic field switches? 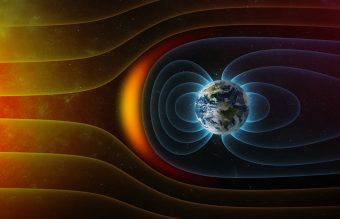 The Earth’s magnetic field protects life on Earth, shielding it from damaging radiation and moderating our climate. So the idea that it could completely flip around, or collapse altogether, should cause us to worry, right? Well, yes and no.

The result of electrical currents generated deep within the Earth through dynamic action, the magnetosphere is a fluid force that is constantly changing in strength and orientation.

The Center of the Earth

The very heart of our planet is a solid inner core of mostly iron that is about the size of the moon. It is so hot (9000°F to 13000°F or about 5000°C to 7200°C) that its temperature equals that of the “surface” of the sun, but it remains solid because of the combined pressure of everything above it being pulled toward it by gravity.

Surrounding this solid inner core is a second layer made primarily of an iron-nickel alloy. Nearly as hot (7200°F to 9000°F or about 4000°C to 5000°C) but under a bit less pressure, this outer core is liquid.

The disparity in temperature between the inner core and the mantle causes the Earth to become a giant magnet. As was recently explained:

There needs to be a 2,700-degree F (1,500C) difference between the inner core and the mantle to spur “thermal movements” that – along with Earth’s spin – create the magnetic field.

These thermal movements of flowing liquid induce electrical currents that in turn create the magnetosphere:

For magnetic field generation to occur several conditions must be met: 1. there must be a conducting fluid; 2. there must be enough energy to cause the fluid to move with sufficient speed and with the appropriate flow pattern; 3. there must be a “seed” magnetic field… There is sufficient energy [in the outer core] to drive convection, and… coupled with the Earth’s rotation, produce the appropriate flow pattern… The existing field [of the Sun] acts as the seed field. As a stream of molten iron passes through the existing magnetic field [of the Sun], an electric current is generated… The newly created electric field will in turn create a magnetic field…

The Magnetic Field in Flux

Given the fluidity of the system, it stands to reason that the magnetic field is not an immovable constant, but changes in its strength, orientation and polarity.

Since it was first pinpointed in 1831 by James Ross, the magnetic north pole has moved more than 600 miles, and in recent years, this change has accelerated from “an average speed of 10 km per year . . . to 40 km per year.” It is expected to move from its current location in North America to Asia within a few decades.

Over the last 200 years, the magnetic field has “weakened by about 15 percent.” Since the magnetic field shields the Earth’s surface from some amount of radiation, “flares and coronal mass ejections from the sun,” were the field to disappear entirely, there could be dramatic consequences:

Radiation at ground level would increase . . . causing more deaths from cancer . . . but only slightly . . . . Electric grid collapse from severe solar storms is a major risk . . . [and] the Earth’s climate could also change . . . . Some speculative studies have suggested that as the Earth’s magnetic field weakens we could see an increase in cloud coverage in the troposphere and an increase in the polar ozone holes . . . .

Although scientists aren’t certain, some believe that the pole flip is related to the convection within the core, where “lighter components, like oxygen, sulfur, and silicon . . . rise toward the core-mantle boundary (CMB).” Accumulating like sediment on the floor of the ocean, these “fall” upward from the core onto the surface of the mantle, which is uneven like the topography of the Earth’s surface. When enough sediment collects, it tumbles like an avalanche, into the outer core, thereby cooling it. Some theorize that “truly massive CMB avalanches could disrupt the geodynamo and cause Earth’s dipole [two-poled magnetic] field to collapse.”

Discerned from magnetic signatures found on rocks and sediments, scientists today know that the poles routinely switch places. For those reversals that last 200,000 years or more, the change occurs over a 1,000 to 10,000 year-period:

It’s not a sudden flip, but a slow process, during which the field strength becomes weak, very probably the field becomes more complex and might show more than two poles for a while, and then builds up in strength and aligns in the opposite direction.

Given the field’s waning strength over the last couple of centuries, some scientists believe we are approaching another long-term flip. Many downplay the risk to humans, noting that the magnetosphere rarely disappears, so life on Earth remains largely protected during the reversal.

However, if the magnetic field were to significantly weaken, we could (potentially) be in trouble. In fact, some researchers have opined that there is “a direct link between the demise of the Neanderthals . . . and a significant decrease of the geomagnetic field intensity that occurred exactly at the same period.”

In recent years, scientists have found evidence that magnetic pole shifts can occur very quickly, although it is not clear if they typically result in complete reversals.

In the late 1960s near the village of Laschamp in the Massif-Central in France, scientists found incomplete evidence that led them to believe an extremely rapid, short-term magnetic reversal had occurred a mere 41,000 years ago (about the time the Neanderthal disappeared from Europe).

Other evidence of a rapid pole shift was discovered in 1995 in hardened lava in Steens Mountain, Oregon. There, magnetic crystals in the rocks indicated a super-fast magnetic shift had occurred, one in which the poles moved “over 10,000 times faster than normal, at six degrees a day.”

At that breakneck rate, a complete magnetic shift could occur in months, rather than thousands of years, so many scientists were understandably skeptical – that is until further evidence of short-term flips was found in 2010 in Battle Mountain, Nevada, where it was revealed that the “magnetic field moved by 53 degrees in a single year.”

Even more recently, in 2012, scientists re-visited the Laschamp event, this time examining sediment cores from the Black Sea as well as other data from the South Pacific and North Atlantic, and their findings were remarkable:

The field geometry of reversed polarity, with field lines pointing into the opposite direction when compared to today’s configuration, last for only about 440 years, and it was associated with a field strength that was only one quarter of today’s field. . . . During this period, the field was even weaker, with only 5% of today’s field strength. As a consequence, Earth nearly completely lost its protection shield against hard cosmic rays, leading to a significantly increased radiation exposure.

Although there is no direct evidence of a causal relationship, the Black Sea sediment cores also revealed that two other “extreme scenarios” occurred at about the same time:

Numerous abrupt climate changes during the last ice age [were happening along with] . . . the largest volcanic eruption on the Northern hemisphere in the past 100,000 years . . . near Naples, Italy . . . [and the] short and fast reversal of the Earth’s magnetic field.