This Day in History: April 14th 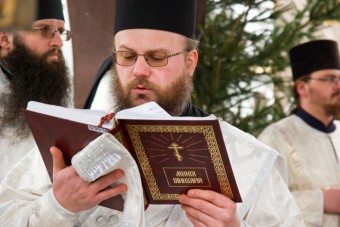 The Christianization of Poland was a shrewd political choice by Mieszko I, the first ruler of Poland, to ally his country with the Czechs who had also embraced Christianity, rather than the Germans who still practiced Paganism. Uniting the Polish people under a common faith was also a way to strengthen the country and their allegiance to Mieszko I. Dobrowa of Bohemia (a Czech kingdom), Mieszko’s wife and a devout Christian herself, was thought to be instrumental in the promotion of Christianity in Poland. This mass baptism is considered the birth of the modern Polish state.

In the week leading up to the mass Baptism, those receiving the sacrament prepared by attending catechism classes and fasting. During the actual ceremony groups segregated by sex were baptized by having holy water poured over their heads or by total immersion in water. The priests would then anoint the new Christians by making the sign of the cross on their foreheads with sacred oil.

On Holy Saturday, April 14, 966, Mieszko I and most of his court converted to Christianity. It’s still unknown where the baptism took place, but Gniezno or Poznan seem to be the best bet. This baptismal mission did not end here. It spread throughout Poland with the building of churches and the establishment of clergy over the course of many decades.

The new religion wasn’t a big hit with everyone. Mieszko’s baptism was enough to persuade many Poles to convert, but others weren’t willing to give up their ancient gods and long-held customs to worship a Middle Eastern deity they’d never heard of before. Christianity had to be enforced by the state, causing a popular uprising against the religion in the 1030s.

In some areas of Poland, such as Pomerania, it wasn’t until about two hundred years after Poland’s baptism before Christianity gained ascendancy over Paganism, and it wasn’t until the 13th century that the Christian faith was the dominant religion throughout the country.