Who Is Stanley and Why is There a Cup Named After Him?

March 3, 2014 Melissa
S. Katz asks: Who is Stanley and why is there a cup named after him? Thanks! 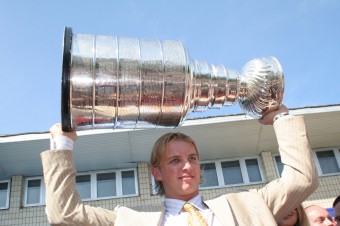 The oldest championship trophy in professional sports in North America, the Stanley Cup’s rich history is only matched by that of it’s namesake.

Sir Frederick Arthur Stanley was born into one of England’s richest families in 1841 and could trace his ancestry back to William the Conqueror. He attended Eton College and in 1858, became a member of the Grenadier Guards. By the time he retired seven years later, he had attained the rank of Captain.

In 1865, Frederick followed his famous father (Edward Smith Stanley had served as Prime Minister three times) to Parliament, and in 1868, his father’s political ally, Benjamin Disraeli, appointed him as Civil Lord of the Admiralty.

By 1874, impressed with Frederick, Disraeli appointed him to be the financial secretary of the War Office, and later in 1877 to be the financial secretary of the Treasury. In 1878, Frederick became the War Secretary, during which time he abolished flogging, despite strong resistance. He was knighted (G.C.B.) in 1880, and by 1886, “he was raised to the peerage in his own right as Baron Stanley of Preston.”

After having spent over 20 years in Parliament, Queen Victoria appointed Lord Stanley as Governor General of Canada in 1888. He was apparently only a so-so governor:

He came near to muddling the crisis over Macdonald’s successor in May 1891 and he had little constructive to offer in the various difficulties – particularly the Newfoundland question – then facing Canada. Personally, however, Stanley was popular…

Nonetheless, the Stanleys travelled throughout Canada, and developed a love for its national pastime – hockey. Stanley’s eight sons and two daughters were avid enthusiasts, and three of his sons played for the Ottawa Rideau Rebels. It is also reported that Lady Isabel Stanley played the game on a ladies hockey team.

Convinced of the need for a symbol for which the teams could compete, Lord Stanley wrote to the Ottawa Amateur Athletic Association in 1892:

Lord Stanley never saw the cup awarded, however, having resigned as governor and returned to his family’s estate in England the year before when his brother, the 15th Earl of Derby, died. Nonetheless, he was enshrined as a “charter member of the Hockey Hall of Fame” in 1945.

Purchased by Lord Stanley for about $50 (about $1200 today), the original trophy was 7.5″ tall, 11.5″ in diameter, and, simply, a cup. The first team to win it was the Montreal Amateur Athletic Association (MAAA) in 1893, and for many years, only amateur teams competed for the Cup.

Teams with the professional National Hockey Association started to compete for it in 1910, and by 1926, the Stanley Cup had “become the trophy of the National Hockey League.”

From its inception, Lord Stanley envisioned that the Cup would be altered:

Each winning team to have at their own charge engraved on a silver ring fitted on the cup for the purpose the name of the team and the year won.[i]

As a result, the cup has changed significantly from Lord Stanley’s original squat bowl. From the start, the “base was fitted with a silver ring,” and by 1909, another ring was added to put the trophy at 16″ tall. Throughout the 1920s, bands of different widths were used, but during the 1930s, “identical-looking thin bands of engraved silver were added every year.”[ii]

In 1948, the Cup was “rebuilt into a two-piece trophy with a wide barrel-shaped base beneath the removable bowl and collar.” For the next 10 years, engravings were made to the barrel until:

A modern one-piece Stanley cup was introduced [whereby] the silver from the old barrel was retired to the Hockey Hall of Fame and replaced with five new bands, each of which could accommodate the names of 13 winners.[iii]

Take the Cup for a Day

It’s tradition in the NHL for the players on the championship team to have some “alone time” with the cup, and today, each player gets to spend a day with it. As you can imagine, this has created some funny situations.

One of the Ottawa Silver Seven, in 1905, failed when he tried to kick the Cup across the Rideau Canal; luckily the water was frozen, so the players were able to get it in the morning.

Shortly after, in 1907, when one of the Montreal Wanderers left the Cup with a photographer, the shutterbug’s mother turned it into a flowerpot (until it was picked up by the Wanderers a few months later).

The Cup was left on the side of the road by a few Montreal Canadiens in 1924 after they had stopped to change a flat. Fortunately, it was right where they left it when they returned later to get it.

In 1940, the New York Rangers accidentally lit the Stanley Cup on fire, although, luckily, they had enough urine available to extinguish it.

Mark Messier apparently took the Cup to strip clubs, including to one in Edmonton, Alberta, where he let fans drink from it. After he dented it in 1998, he had it fixed at an “automotive repair shop.”

Eddie Olczyk is rumored to have let Kentucky Derby winner, Go for Gin (a horse), eat out of it in 1994, although Olcyk denies the feeding. Regardless, after 1994, the Stanley Cup has had a chaperone. This didn’t stop Steve Yzerman from showering with it in 2002.

Some of the NHL’s family men came up with unique uses for the cup, as well. In 1996, Sylvain Lefebvre had his child christened in the Cup, and in 2006, Doug Weight ate an ice cream sundae out of it with his kids. However, when Kris Draper placed his infant daughter in it in 2008, “she pooped in the Cup . . . I still drank out of it that night, so no worries.”