There Is Technically No Such Thing as an Electric Eel 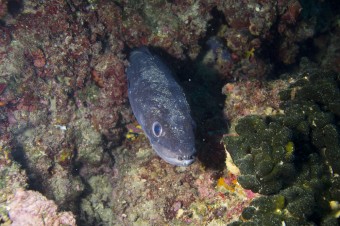 Although there are a number of fish that produce an electric charge, the species that is called “electric eel,” E. electricus, is a member of the fish order, ostariophysian.

Mistaken for an eel due to its shape and lack of pelvic, caudal and dorsal fins, E. electricus has a long (up to 8 feet), cylindrical body with a flat head. Its vital organs are found in the front fifth of its body (near the head), while the rest of its long body contains three electric organs, together filled with nearly 6,000 specialized electrocyte cells that, as the name suggests, produce, store and discharge electricity.

The electric organs begin to develop early in the fish’s lifetime. The Sachs, which produces only a weak electric charge and is used for echolocation, begins to develop very soon after birth. The other two electric organs, known as the main and the Hunter’s, produce much higher voltages of around 600 volts and about 1 amp, so about 600 watts for approximately 2 milliseconds.

Although the fish has gills, it takes in most of its oxygen through its “highly vascular mouth,” and, therefore, often comes to the water’s surface to breathe.

The fish is also covered with a thick, gray to brownish/black skin. It is presumed that this tough layer protects it from its own electrical current.

To reproduce, the female of the species deposits up to 17,000 eggs in a spit-nest made by the male during the dry season, and, on average, 1,200 of those eggs hatch. In captivity, male electric fish live up to 15 years and females up to 22.

The electric fish is native to the South America, particularly the Orinoco and Guyanas rivers, as well as large portions of the Amazon river basin. It lives on river bottoms and in swamps, and thrives in relatively low-oxygen waters because of its propensity to mouth breathe.

While swimming through its murky habitat at night (it’s nocturnal), the electric fish orients itself by periodically emitting a weak electrical discharge:

This lower voltage can be used to “see” surrounding objects. Objects with a different conductivity will distort the electric field that the eel produces, thus making the eel aware of the object’s presence.

After locating its prey with weak electrical pulses, E. electricus kicks it up a notch:

Once prey is found the electric eel will use a much larger electrical current to stun the fish.

Toothless, electric fish eat their prey by “open[ing] their mouths to create a suction,” and swallowing the meal whole.

Able to produce a voltage as high as 650 volts and about 1 amp, the electric fish emits a strong, brief (2 milliseconds or less) shock when it is attacked by a predator. Although experts say the shock is rarely fatal by itself, it can kill some animals.

How Does it Produce Electricity?

Each electrogenic cell [electrocyte] carries a negative charge of a little less than 100 millivolts on its outside compared to its inside. When the command signal arrives [from a “command nucleus” in the nervous system], the nerve terminal releases a minute puff of acetylcholine, a neurotransmitter.

This acetylcholine is secreted:

Through nerves on one side of the cell, causing ion channels to open on that side. Sodium ions are able to rapidly enter the cell via these channels . . . [which] alters the equilibrium of the cell. To re-establish [it], potassium ions leave the cell on the other side,. . . .

A transient path with low electrical resistance connecting the inside and outside of the cell. Thus, each cell behaves like a battery with the activated side carrying a negative charge and the opposite side a positive one. Because the cells are oriented inside the electric organ like a series of batteries piled into a flashlight, the current . . . set[s] off an avalanche of activation that runs its course in just two milliseconds. . . [and] creates a short-lived current flowing along the eel’s body.

Can Its Energy Be Harnessed?

Scientists have long been impressed with the electrical generating ability of E. electricus, and recent research is leading to uses that may benefit people.

Since 2009, scientists at the Living Planet Aquarium in Sandy, Utah, have been harnessing the power of their resident electric fish to power the lights on the aquarium’s Christmas tree.

Essentially, two stainless steel electrodes are attached to Sparky’s (the electric fish) tank, and each time Sparky sends out a pulse, which is part of “his natural, normal activity,” currents of electricity travel through the electrodes to sequencers that make the lights on the tree flash. Living Planet’s marketing director loves the display because it “helps give a visual idea of what an animal really does on a daily basis.”

Some medical implants and devices require batteries to power their complex functions. In recent years, scientists have been looking for ways to create “bio-batteries,” that “would be just like any other cell in your body,” except they also produce electricity.

A few researchers have been investigating whether E. electricus’ electrocytes might make a good blueprint, and are:

One hurdle to producing a viable bio-battery is finding a human-safe power source, although “bacteria cold be employed to recycle ATP – responsible for transferring energy within the cell – using glucose.”

Researchers remain hopeful, particularly since the bio-battery has many advantages including: “if it breaks, there are no toxins released into your system.”

How Do Electric Eels Generate Electricity