The Legendary Island of Hy-Brasil 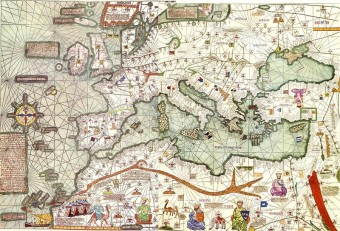 From King Arthur’s Avalon to Plato’s Atlantis, Jonathan Swift’s Laputa to Pi’s carnivorous Eden, people have long dreamed of magical islands where the miraculous happens and the lost find sanctuary. The Celts of Ireland were no different, and in their tradition, the mythical island was known as Hy-Brasil.

The Myth of Brasil

Also called O’Breasail, Hi-Brasil, O’Brazil, Hy Breasail, Hy Breasal and Insula Fortunatae (Fortunate Island), the “Isle of the Blessed,”[1] was believed to be a place of plenty and happiness, located somewhere to the west. According to Celtic tradition, “Country O’Breasal lay roughly where the sun touched the horizon or immediately on its other side.”[2]

Scholars variously claim Breasail was a powerful chieftain or an immortal god. The clan Ui Breasail is known to historians to have inhabited northeastern Ireland. According to legend, the great Iron Age chief, Breasal, mourned his lost daughter who drowned in the river Gaillimh near Galway Bay (just east of where the island of Brasil is often placed on old maps).

Others note that Breasal was the name given to the Celtic immortal High King of the World who, according to legend, held court on the island of eternal happiness, Hy Breasal,[3] every seven years; during the interregnum, the island is reported to have descended beneath the waves.[4]

Brasil on the Map

Angellino de Dalorto was the first to map Brasil; in his famous1325 work, he placed the island slightly to the southwest of Ireland, and labeled it Insula de monotonis siue de brazile.[5] In this and his 1339 map (published under the name Dulcert), Dalorto represented Hy Breasail as having “a strikingly round form, often divided by a channel.“[6]

By 1375, the Insula de Brazil was placed at two sites on the Catalan Atlas – one west of Ireland and the other to the south. Yet, by 1480, one of the two islands, both labeled “Illa de brasil,” had shifted to just south of Greenland, while the other remained near Ireland.

Even into the industrial age, Hy-Brasil was included on maps and charts, apparently, and according to some researchers, appeared in 1776 as “a rock 6 degrees west of the southern point of Ireland,”[7] and continued to be recorded as late as 1865 on British Admiralty charts.

In Search of Brasil

Regardless of whether anyone had actually visited the island and truly mapped its features, at some point in the 14th or 15th centuries, it was lost again.

Many famous and not so famous explorers looked for Hy-Brasil. In 1480, John Cabot launched an expedition to search for Brazil,[8] and repeated the effort, apparently, every year from 1490-1497.[9] Although no definitive proof that Cabot’s expeditions reached the island exists, Pedro de Ayala, a Spanish diplomat, reported in 1497 that Cabot told him he made his journey to and from North America with “the men from Bristol who found Brasil.”

Since then, others reportedly reached the island. In the 17th century, a man named O’Ley claimed to have been “kidnapped and taken to Hy-Brasil.”[10] At about that time, in 1674, Captain John Nisbet, sailing through a fog bank, reported that a landing party who traversed the island met an old man who gave them gold and silver. A second expedition to the island, led by Captain Alexander Johnson, also claimed to have found Brasil.

In 1872, Irish folklorist T.J. Westropp and his companions reported they saw the island appear and vanish beneath the waves. In fact, as late as the early 20th century, Irish fishermen were claiming to have “sailed as far as Hy-Brasil.”[11]

Where Did it Go?

Some believe Brasil was actually Baffin Island. They support their theory by noting that, through the years, the notably round, bifurcated island in the North Atlantic shifted to the west as maps became more sophisticated.

For example, in later charts such as Johannes Ruysch’s 1508 map, the first split island to appear to the west of Ireland sits in the gulf of Greenland. As exploration continued, this island appears to be placed further and further west. Ultimately, they claim, it becomes the mass we know today as Baffin Island.

In secondary support for this theory, these historians point to Dalorto’s early works, which place Brasil in the middle of numerous “Fortunate Islands.” Baffin Island is just one of over 90 major islands in the Arctic Archipelago.

Another theory is that the island was part of what is now a “sunken land.”[12] Adherents of this hypothesis note that during the last Ice Age (at its peak 20,000 years ago), sea levels were as much as 120 meters lower. Both the Porcupine Bank west of Ireland as well as sunken ridge under the Aran Islands in Galway Bay may have been exposed, and each is in the vicinity of the mythical location of the island.

A third theory is that Hy-Brasil never existed. Meteorologists have found that during certain climatic conditions, mirages can appear in northern territories and may occur when “layers of hot and cold air refract, or bend, light rays. Light bounces off the surfaces of clouds, water, and ice to create optical illusions.

Those who prefer this hypothesis believe that ancient Celts, seafarers and others may have just experienced an optical illusion. Such tricks of the light are known to have occurred throughout Ireland, and pertinently, sometimes in relation to a Hy-Brasil sighting:

On July 7, 1878, the inhabitants of the Irish seaside town of Ballycotton in County Cork were both surprised and astounded by the sudden appearance of an island that had not been seen in the ocean before. Sighseers gathering on the strand were able to see the new island quite plainly and were able to make out is coastline, woodlands, fields, and deep valleys. A number of County Cork fishermen set out in boats to investigate but as they approached, the entire island winked out of existence, leaving them amazed and wondering.[13]

Although out of vogue for most of the 20th century, Hy-Brasil appears to be making a comeback, particularly with fans of the Fortean. According to an episode of the History Channel’s Ancient Aliens, one of the two American airmen involved in the 1980 Rendlesham Forest incident claims that, among the messages he received telepathically from an alien spacecraft were the navigational coordinates of the location of Hy-Brasil…

Circa 1492: Art in the Age of Exploration (Levenson)

Legendary Islands of the Atlantic

The Mystery of the Island of Hy-Brasil – the other Atlantis

The Phantom Island of Brazil