This Day in History: November 26th 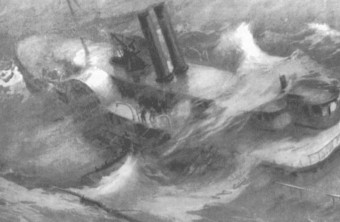 On Saturday, November 26, 1898, the passenger steamship Portland set sail from Boston Harbor, carrying approximately 192 passengers and crew members bound for Portland, Maine. As the Portland was heading away from the coast, a storm system from the Great Lakes and another from the south collided to form an explosive monster-storm that became one of the worst New England has ever experienced.

During late autumn in New England, conditions are perfect for the formation of dangerous, massive storms. Canadian cold fronts head in from the Midwest regularly this time of year, and when these cold air masses clash with the still-warm waters of the Atlantic, it can result in devastating storms that New Englanders call “Nor’easters.” This storm has been referred as a “perfect storm” type scenario, like the nor’easter that struck the New England coast in 1991.

By Saturday night, northeast winds were howling at upwards of 90 mph, temperatures were well below freezing and heavy snow was greatly reducing visibility. The Category 1 hurricane force winds kept forcing the Portland further and further south, until the vessel was floundering helplessly off the Cape Cod coast. Launching life boats would have been futile for obvious reasons, and the captain couldn’t reverse direction without having the ship capsized by the towering waves.

By day’s end on Sunday, debris, lifejackets and bodies began washing ashore on Cape Cod between the Race Point and the Peaked Hill Bars Life Saving Stations. It was impossible to tell if the Portland had exploded, collided with another vessel or broken apart. In the end, the ultimate fate of the Portland is a mystery.

In addition, there was no way to definitively state who was on board the Portland, as the only passenger list went down with the ship. In an effort to identify the lost, in the days following the tragedy, newspapers listed both the names of those believed to have been on board, and physical descriptions of the dead.

Life in New England had ground to a halt as the storm raged on for around 30 hours and buried everything under two feet of snow. In some areas, drifts were as high as 20 feet, and some found themselves having to dig tunnels from their doors to reach the street. Most people hadn’t even heard about the Portland yet as communication systems had completely broken down.

After the storm had passed, it was estimated that at least 400 people had lost their lives and 140 ships were lost at sea. Devastating property damage was sustained throughout the entire region, but especially along the coast. The Storm of 1898 still stands as one of the worst New England has ever endured, and that’s saying quite a bit.

With the estimated 192 lives lost on the Portland, The Gale of 1898 has always been known as the “Portland Gale.”

One positive outcome came about because of this tragedy. Due to the unnecessary heartache caused by having only one copy of the passenger list – and keeping that list on the vessel – new regulations were put in place ordering all passenger ships to leave a second passenger list onshore.