This Day in History: October 29th 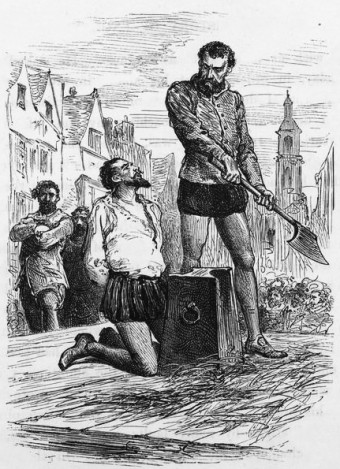 Sir Walter Raleigh was an explorer and scholar of the Elizabethan era who was born in Devon around 1552. He came from an affluent, well-connected gentry family, attended Oxford University and also studied law for a time.

Raleigh has been given credit for bringing the potato and tobacco home to England, but in reality the Spanish had already beaten him to it. He did do a fair bit to help popularize tobacco smoking in his homeland, so he has the dubious distinction of increasing the incidence of lung cancer and COPD unimaginably for generations of his countrymen. Go Walt.

Raleigh’s life was about to get a whole lot better – and then a whole lot worse – when he caught the eye of Queen Elizabeth I in 1580 after suppressing an uprising in Ireland. Queen Elizabeth, no doubt traumatized by her father Henry VIII’s marital exploits including her mother Anne Boleyn’s unjust beheading when Elizabeth was only two years old, had decided never to marry. Instead, she surrounded herself with attractive young men who fawned over her and complimented her beauty, even as she grew old and lost both her hair and her teeth.

Raleigh, who was handsome, debonair and charming, soon became one of the queen’s “favorites.” The queen showered him with gifts and offices, and he was knighted in 1585. Sir Walter Raleigh was made a Captain of the Queen’s Guard in 1587, a position of high prestige that was indicative of how much trust the queen place in him.

Then Raleigh screwed up big time. He secretly married one of the queen’s maids of honor, Elizabeth Throckmorton, in 1592. Queen Elizabeth threw a hissy for a couple of reasons – plain old-fashioned jealousy, and, as queen, she was entitled to be consulted on a maid of honor’s marriage. (She would usually say no in a situation such as this, so it’s easy to see why the newlyweds got desperate and did it on the sly). She was mad enough to throw Raleigh and wife in the Tower, but they were imprisoned in conditions not unlike the Four Seasons Hotel.

Upon his release, Sir Walter wasted no time trying to regain favor with the queen, and set off on an expedition to find El Dorado (The “Golden Land”), in what is now Venezuela. El Dorado eluded him, but Raleigh did explore around 400 miles of the Orinoco River Valley.

Queen Elizabeth’s death and the ascension of James I in 1603 was bad news for Raleigh, as Good Queen Bess had an obvious soft spot for the explorer, but the new king pretty much hated him. James’s butt had hardly touched the throne before Raleigh found himself in the Tower (again), but this time he was sentenced to death.

The charges brought against him had no real evidence to back them up, and Raleigh was given a reprieve, but was still kept prisoner in the Tower. Sir Walter used his spare time writing his book “History of the World.”

In 1616, Raleigh was freed from the Tower to lead another expedition searching for El Dorado. The trip was a failure, and Sir Walter disobeyed the king’s orders by attacking the Spanish in the process. To appease Spain, Raleigh’s 1603 death sentence was reinstated by James I. Surely it didn’t bother King James to sign that death warrant.

Unfortunately for Sir Walter, he couldn’t charm his way out of trouble with this monarch.

On October 29, 1618, Sir Walter Raleigh, scholar, explorer, historian, and arguably the last great personage of the Elizabethan era, met his end dressed to the nines in front of a packed crowd. After he made his final speech, he asked the headsman to show him the axe that would end his life, at which point he supposedly quipped:

This is sharp medicine…that will cure all my diseases.

The axeman hesitated when Sir Walter gave him the sign to strike, and Raleigh yelled, “Strike, man, strike!”

The executioner, struck, and struck again, and it was all over.