This Day in History: October 24th 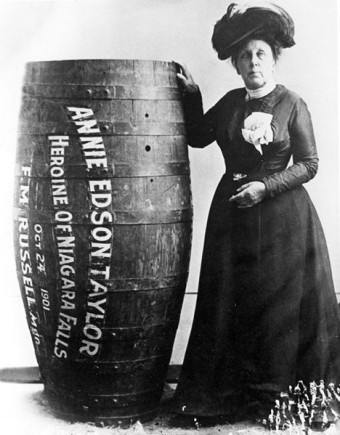 Anna Edson Taylor was the first adventurer to take the plunge over Niagara Falls in a barrel who lived to tell the tale.

The future daredevil was born on October 24, 1838, in Auburn, New York. Her family was financially well off, and Anna was accustomed to the finer things in life. Her father died when Anna was only 12, but the inheritance he left from his flour mill meant the family could continue to live in the manner they were accustomed to.

When Anna was 17 and studying to become a teacher, she met a young man named David Taylor, and after a whirlwind courtship they married. After seven years of marriage, Anna was widowed when her husband was killed during the Civil War.

In the years following her husband’s death, Anna lived the life of a nomad. The inheritance from her father was dwindling fast, so she wandered all over the country taking jobs as a teacher and a dance instructor in a never-ending quest for financial stability.

Anna’s feelings at the time are clearly stated in her own words in Dwight Whalen’s book The Lady Who Conquered Niagara:

For a woman who had had money all her life and been used to refined surroundings and the society of cultured people, it is horrible to be poor.

Desperate for a solution to her financial woes, Anna was reading an article in the “New York World” about Buffalo’s Pan-American Exposition, and how many people flocked to Niagara Falls during this event.

I laid the paper down, sat thinking, when the thought came to me like a flash of light — “Go over Niagara Falls in a barrel. No one had ever accomplished this feat.”

Her mind made up, Anna wasted no time making the trip from Bay City, Michigan, where she was currently residing, to take a dive over Horseshoe Falls in a 160 pound oak barrel. She was convinced that once she accomplished this ground-breaking feat of death-defying bravery, her notoriety would reap her enough financial rewards to keep her living in luxury the rest of her days.

Thus, on October 24, 1901, the just turned 63-year-old Anna Edson Taylor made history as the first person to go over Niagara Falls in a barrel and survive.

The padded barrel held an anvil weighing 100 pounds for ballast, and a bicycle pump was used to increase the air pressure inside once Annie was secured. The barrel, which she had brought with her from Bay City, was held together by seven iron hoops.

Several thousand spectators were on hand when Anna went over the 167-foot falls in about three seconds time. Anna was alive and conscious when removed from the barrel, though mumbling incoherently. She was able to walk from the shore to a waiting boat, and the only injuries she sustained were a 3-inch gash behind her right ear and pain between her shoulder blades. She was in shock, but expected to recover completely, which she did.

Her advice to other would-be Niagara Falls-in-a-barrel wannabes? “Don’t try it.”

Unfortunately, Anna’s plans of fame and fortune didn’t pan out the way she’d hoped. She enjoyed some brief media attention and did a little lecture tour talking about her fall, being the only person ever to have gone over the falls for a decade, but she certainly didn’t attract the riches she’d hoped for. Some accounts say her manager stole the real barrel she used and embezzled whatever earnings she had managed to make from her notoriety. Anna died in poverty on April 30, 1921.