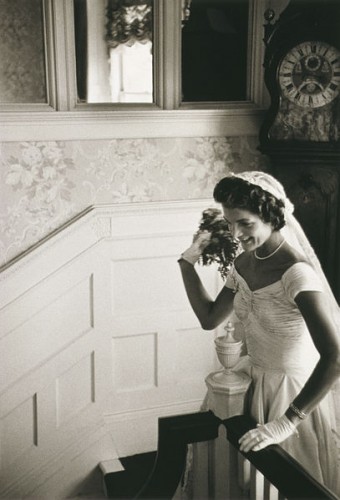 The foundation for what would later be fondly remembered as Camelot was laid on a crisp and clear September day at St. Mary’s Catholic Church in Newport Rhode Island. The petite and doe-eyed 24-year-old bride possessed a natural elegance and grace that far exceeded her years. She would make the perfect companion and political wife for the handsome and charismatic 36-year-old senator from Massachusetts.

Jack and Jackie, as they were known to friends and family, were married in the presence of roughly 800 guests, including a good number of political luminaries and Hollywood stars. The Archbishop of Boston, Cardinal Cushing, conducted the nuptial Mass, and the Pope sent the couple a special blessing from Rome for the occasion their marriage.

When the Mass was over, an additional 450 guests joined the happy couple at the Auchincloss family’s 300-acre estate Hammersmith Farm for a luncheon followed by music and dancing. Jack and Jackie’s first dance as a married couple was to the Meyer Davis Orchestra’s version of “I Married an Angel.”

This may all sound very glamorous and enviable, but wealth and privilege doesn’t ensure your wedding day will go off without a hitch. The groom arrived to the ceremony with his face scratched up from landing in a rose bush during an impromptu football game with his brothers and his ushers. Typical Kennedy hijinks.

To make matters worse, the bride’s adored father “Black Jack” Bouvier passed out drunk and was unable to walk his daughter down the aisle. Jackie’s stepfather Hugh Auchincloss stepped in, and inquisitive reporters were told that the unfortunate Jack Bouvier had been stricken with a severe and untimely bout of flu.

Like most couples, Jack and Jackie had their share of marital woes. Unlike most couples, their woes were played out in front of the eyes of the world. Even before their marriage, Jackie worried about Jack’s wandering eye, and now that she was facing the reality of it, she found it increasingly hard to bear. Her mother-in-law Rose’s policy of willful ignorance in matters of infidelity was beyond her ability – or comprehension. So resentment built up, and on occasion she would even consider leaving Jack, only to be dissuaded by her father-in-law Joe, who she adored.

Jack found Jackie’s astronomical shopping bills a constant source of irritation. Her refusal to participate in political events or fundraisers that didn’t interest her also drove him nuts. One thing was crystal clear – they definitely knew how to push each other’s buttons.

There was also another side to this intriguing couple that the cynics seemed to forget. Many seemed to consider this pairing as little more than an arranged marriage – orchestrated by Joe Kennedy to further his son Jack’s presidential ambitions, and perhaps in part it was. But in the end, this was the union of a man and a woman that despite their troubles, apparently loved each other, made evident by their own words:

Jackie speaking in 1962 during the Cuban Missile Crisis:

If anything happens, we’re all going to stay right here with you,” she remembers telling her husband. “Even if there’s not room in the bomb shelter in the White House. … I just want to be with you, and I want to die with you, and the children do, too – than live without you.

I’d known a lot of attractive women in my lifetime … but of them all there was only one I could have married — and I married her.