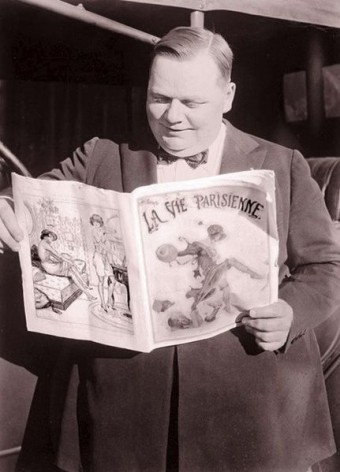 On this day in history, 1921, silent film star Fatty Arbuckle was arrested for murder, in Hollywood’s first major scandal.

Over Labor Day weekend in 1921, Roscoe “Fatty” Arbuckle, the first in a long line of overweight and over-the-top comedians beloved by movie goers, decided to take a break from his hectic filming schedule and booked a luxury suite at the St. Francis Hotel in San Francisco. He brought a couple of friends to keep him company, and it wasn’t long before word got out that Fatty had a party going on up north. Soon Rm.1219 at the St. Francis was the place to be.

Among the revelers was a young starlet named Virginia Rappe, a struggling actress who, like most everyone else at the party, had been drinking heavily. Jazz music was blaring, people were singing the popular songs of the day with drunken abandon, and everything was clouded in a bootleg booze-soaked haze.

At some point during the festivities, Fatty and Virginia were in a bedroom together when Virginia began screaming. Guests responding to her cries found her fully dressed on the bed, moaning in agony. As she rolled back and forth writhing with pain, she uttered the words that would ruin Roscoe Arbuckle’s life -“He did this to me.”

Fatty told his guests the story he stuck to until the end of his life: That he had been passing through to use the bathroom, and happened upon a drunk Virginia passed out on the floor. Arbuckle picked her up and deposited her on the bed, and assumed she must have fallen from the bed and back on to the floor at some later point.

Fatty wasn’t the only one to assume that Rappe was merely intoxicated, other revelers figured the same, and thought nothing of it as they eventually left the St. Francis to return to Hollywood.

Her condition steadily deteriorated though, and three days later her friend Bambina Maude Delmont brought her to the hospital and told the doctor that Rappe had been raped by Fatty Arbuckle. A medical examination showed no signs of sexual assault, however, and apparently Rappe suffered from an inflammation of the bladder called chronic cystitis. She died from peritonitis a day later due to a ruptured bladder.

Arbuckle was arrested by the San Francisco police on September 11, 1920, which generated an explosive scandal – the first with ramifications that could affect box office returns – so Hollywood was quick to turn on him and boycott his films.

Fatty firmly maintained his innocence, but the San Francisco D.A. had political ambitions that could be advanced by prosecuting Arbuckle, so even though his star witness Delmont had a criminal record of her own, he went full steam ahead.

Other witnesses for the prosecution would later claim there were coerced into providing false testimony by the ambitious D.A.

Two mistrials later, Arbuckle was acquitted at his third trial in mere minutes, with the jury going so far as to issue the defendant a written apology:

Acquittal is not enough for Roscoe Arbuckle. A grave injustice has been done.

Although his name had been cleared, Arbuckle faced astronomical legal bills; a public who on the whole still considered him a rapist and murderer no matter what the jury said; and an ungrateful film industry that banned him from ever working again, conveniently forgetting all the money he had made them back in the teens.

When Warner Bros. finally offered him a feature film contract in 1933, he reportedly said: “This is the best day of my life.”  He died in the arms of his wife that very night of a heart attack. He was 46 years old.