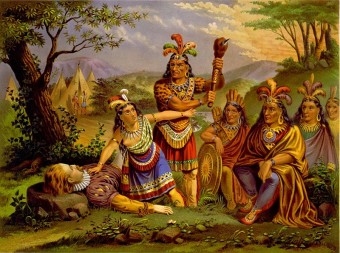 This Day In History, 1608: John Smith Becomes President of Jamestown

The first permanent English settlement of the American colonies, Jamestown, Virginia, elected the larger-than-life John Smith to be their first council president, thanks to his superior organizational abilities and his diplomatic skills when dealing with the indigenous tribes of the area.

Around 100 English colonists set up shop on the banks of the James River in May 1607 and founded a settlement they called Jamestown. (They were intrepid, but not very original.) Unfortunately, they were plagued by bad luck from the start, suffering through famine, disease and Indian raids. John Smith was a tremendous help to the community by helping with survival efforts and mapping the lay of the land.

In December of 1607, Smith and two companions were exploring the area around the Chickahominy River when they were taken prisoner by Powhatan warriors. Smith’s two fellow travelers were killed, but Smith was released thanks to the heartfelt pleas from the 13-year-old daughter of Chief Powhatan, Pocahontas.

When John Smith became leader of the settlement in 1608, the community continued to be rife with problems. A fire had swept through the tiny settlement and annihilated almost all of their humble building and belongings, while famine, disease and Indian attacks were a daily fact of life for the exhausted colonists.

Pocahontas often came to Jamestown as a good will emissary on her father’s behalf, sometimes bringing food to alleviate the settlers’ suffering. She became friendly with many of them, and adapted to English ways. John Smith, whose life she had saved, had to return to England in 1609 when he was seriously injured from an accidental explosion in his gun powder bag.

He made his way back across the Atlantic in 1614, carefully mapping the New England Coast from Penobscot Bay all the way south to Cape Cod.

Ever the adventurer, John Smith was taken prisoner by pirates in 1615, but made good his escape after three months of activity. He eventually made his way back home to England, where he died in 1631.

As for Pocahontas, she was abducted by the English in 1613 and while in captivity, changed her name to Rebecca and decided to stay with the English rather than return to her tribe when she was offered the chance to do so.    She soon married a tobacco farmer, John Rolfe; this marked the first known interracial marriage in the Americas.

She was later brought to England in 1616 with the intent of her being used to encourage more European settlers to America.  While on a ship to return to Virginia, she died (some say of tuberculosis) in March of 1617 at just 22 years old.  Rolfe claimed her final words were “all must die, but tis enough that the child liveth.” (Referring to her son, Thomas Rolfe).

Thomas Rolfe also got sick, so was left in England in the care of his uncle and never saw his father again.

This Day In History, 1776: Nathan Hale Volunteers to Spy Behind British Lines

George Washington needed a volunteer – someone who was willing to take on the dangerous job of gathering intelligence behind enemy lines before the upcoming battle of Harlem Heights. Captain Nathan Hale of the 19th Regiment of the Continental Army quickly volunteered, becoming one of the first spies of the Revolutionary War.

Disguised a Dutch schoolmaster, Hale was successful at his task for several weeks. Then the tide turned, and when the British took control of Manhattan, they stepped up their efforts of seeking out American spies. Hale’s luck ran out, and on September 21, 1776, he was captured attempting to escape across Long Island Sound toward American controlled territory.

Hale was caught traveling with incriminating documents, so British General William Howe ordered that Hale be executed the very next day. After the 21-year-old Captain had been led to the gallows, legend has it that when asked if he had any last words Hale replied, “I only regret that I have but one life to give for my country.”

Fact or fable, it matters not – it sums up beautifully the spirit of the time, and the men living in it.