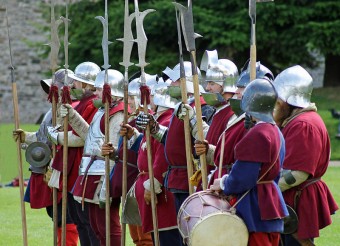 This Day In History, 1513: James IV of Scotland is Slain at Flodden Field

In 1513, as King Henry VIII of England was waging one of his many invasions on the kingdom of France, the French King Louis XII asked his fellow Henry-hater James IV of Scotland if he wouldn’t mind heading south and causing a little mayhem in Henry’s kingdom to even the score a bit. The French could pretty much bank on the Scots being up for the task.

Scotland’s eagerness to war with England was twofold – one was to honor the Auld Alliance they had in place with France, and secondly, Henry was just another in a long line of English kings to claim rights to the Scottish throne, and the Scots had just about had it with that nonsense.

With Henry still asserting his claim in France (yep, English kings also claimed sovereignty over much of France as well), he’d left his very capable queen Catherine of Aragon as regent, and she quickly and efficiently began to order the raising of armies to meet the Scottish threat. Once the army was raised, the Earl of Surrey, the king’s 70-year-old Lieutenant General, led an army of 26,000 to Northumberland to do battle with the Scots.

In due time, the 35,000 or so men of James IV’s armies arrived very close to the village of Branxton. The battle was a decisive victory for the English although they were outnumbered by at least 10,000 men. Most military experts believe the deciding factor was a matter of the English usage of the bill to do battle, opposed to the Scottish dependence on the pike.

In any case, causalities were in the thousands, and most of the young men of the Scottish nobility met their ends on Flodden Field, leading to may years of political instability in Scotland. King James IV’s death on the battlefield had repercussions that would echo for generations to come.

To tell you plaine, twelve thousand were slaine,
that to the fight did stand;
And many prisoners tooke that day,
the best in all Scotland.

That day made many a fatherlesse childe,
and many a widow poore;
And many a Scottish gay Lady,
sate weeping in her bowre.

–The Book of Old English Ballads by George Wharton Edwards

This Day In History, 1543: Mary, Queen of Scots Crowned

Mary Stuart was born on December 7, 1542, the only daughter of King James V of Scotland and his French Queen Mary of Guise. Her father, the son of the unfortunate James IV, died only days after his daughter’s birth. The week old infant became the Queen of Scotland on Dec 14, and was officially crowned as such on September 9, 1543, thirty years to the day since her grandfather was slain at Flodden Field.

Mary was the granddaughter of Margaret Tudor, the older sister of Henry VIII. This made Henry VIII her great-uncle, and his daughter Elizabeth by his second wife, Anne Boleyn, her cousin. This family tie would be the defining element of her entire life, and lead to her death – though some would say martyrdom – on the scaffold in February of 1587.