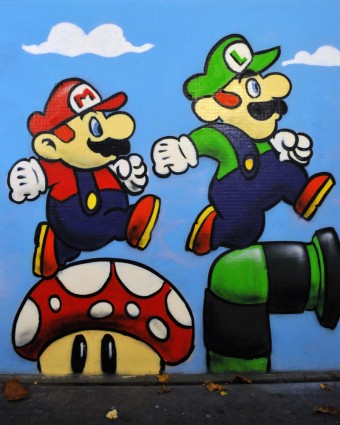 Believe it or not, the history of Nintendo goes all the way back to 1889. And before you ask- no, they were not selling Mario figures carved from wood.

Originally named “Nintendo Koppai”, the small business based in Kyoto started by Fusajiro Yamauchi produced Hanafuda Cards. For those unfamiliar, these are simple playing cards that are used to play multiple games – much like the more common standardized 52 playing card sets. Nintendo’s cards were hand made and quickly gained in popularity.

(If you’re wondering about the name, it’s generally thought that it comes from the Japanese name “Nintendou”, roughly translated “Nin” means “entrusted” and “ten-dou” means “heaven”, so basically “leave luck to heaven”.)

Fast-forward to 1953 and the company was being run by Fusajiro’s grandson Hiroshi Yamauchi (who passed away yesterday- 9/19/2013) and had become the first to produce plastic playing cards in Japan.

This initiative proved to be immensely popular and resulted in Nintendo dominating the industry. However, after a trip to the US in 1956, Hiroshi began rethinking the long term viability of the playing card business. He met with the largest card manufacturer in the country and was shocked by their small offices.  He came to the conclusion that the business was far too limited.

Innovation came in the form of Disney in 1959. Nintendo struck a deal where they were able to print Disney characters on their cards. This enabled the business to tap into an entirely new market. Up until this point, playing cards were regarded almost exclusively as a device for gambling.

With the new, much younger, target audience, Nintendo created books that explained new games that could be played with these cards. The tie in was hugely successful and over 600,000 packs were sold in the first year alone. In addition, the success of the new venture resulted in the company deciding to go public in 1962.

Their newly injected capital resulted in what I can only refer to as some interesting new business directions for Nintendo. A sample of these ventures include: a taxi company; a short stay hotel chain- yes, that means exactly what you think it does; an instant rice food company; Chiritorie vacuum cleaners; and toy making, among others.

Pretty much all of these ventures went nowhere, save the latter.

Unfortunately for Nintendo, it was around this time that the playing card business reached its saturation point. Japanese households stopped buying them and Nintendo’s stock subsequently fell from 900 to 60 Yen. All wasn’t lost though. In 1965, the company hired a new maintenance engineer for their assembly line. His name was Gunpei Yokoi and he would soon help turn Nintendo’s luck around.

Nintendo was struggling to keep afloat in the toy industry at this time and their crippling debt wasn’t helping. That was all about to change though. In 1970, whilst touring one of his Hanafuda factories, Hiroshi noticed the aforementioned Gunpei Yokoi playing with an extending arm that he had made. Deciding to take a gamble, Hiroshi requested Gunpei develop his arm as a proper product that was subsequently released in time for Christmas.

Selling over a million units, the Ultra Hand was an instant hit and earned Gunpei a position in product development. He was highly successful and thanks to his engineering background was able to develop many more lucrative electronic toys (including a Love Tester) for Nintendo. This was significant, because they were one of the only companies developing such toys at the time. As such, they were able to charge a higher price and earn a greater profit margin.

It was around this time that the company began taking an interest in the popularity of video games and were keen to get their fingers in the proverbial pie. They first did this by securing the rights to distribute the Magnavox Odyssey in Japan – the world’s first commercial home video game console.

After their success at their new venture, they decided to develop their own games for the home and arcades. Their first was released in 1975 and was called EVR Race. It was closely followed by others including a little game by the name of Donkey Kong. You probably haven’t heard of it…

The hugely successful ape-centric game was the brainchild of Shigeru Miyamoto, a rising rock star in the gaming industry. It was released in arcades, as well as on the Atari 2600, Intellivision and ColecoVision. In addition to this, the company began experimenting with hand held video games such as the Game & Watch – a predecessor to the Game Boy.

Tired of creating ports for other systems, Nintendo decided to branch into the realm of console development in 1983. The result was the Famicom (short for Family Computer) which was released exclusively in Japan.

Initially it was successful and sold about half a million systems in a mere two months. Unfortunately, the company received complaints about the system freezing and upon investigation, a fault was found in the chips. All remaining Famicoms on the shelves were subsequently recalled. Nintendo attempted to recover by reaching out to Atari for a partnership but the Video Game Crash of 1983 (caused by a saturation of the market as well as some truly terrible games and competition from home computers) destroyed this option.

No stranger to difficult times, Nintendo able to turn this crash into a good thing by surviving while many of their competitors did not.

Then, in 1985, the company announced a world wide release of the Famicom, but with a few changes, including fixing the problem with the original hardware. The design of the console was also altered and the name was changes to the Nintendo Entertainment System, or NES. To help prevent another market crash, Nintendo limited the number of games that third party developers could release each year. Another milestone of this year was the release of Super Mario Bros – a game that needs no introduction. (Incidentally, the first person to do the voice of Mario, also did the voice of Optimus Prime and Eeyore.)

Over the following (almost) three decades, Nintendo released an abundance of home and hand held consoles that need no introduction.  They continue to be a power house in the gaming arena today and this doesn’t appear to be changing any time soon. This is quite impressive for a company that began as a humble playing card manufacturer in Kyoto way back in 1889.