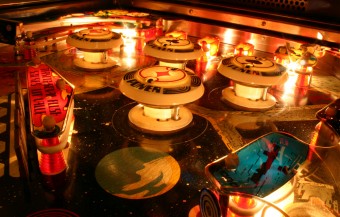 “Ever since I was a young boy, I’ve played the silver ball. From Soho down to Brighton, I must have played them all. But I ain’t seen nothing like him, In any amusement hall… That deaf dumb and blind kid, Sure plays a mean pinball” -The Who’s “Pinball Wizard”

In May of 1976 in New York City, Roger Sharpe watched nervously as city council members piled into a Manhattan courtroom.  Reporters and camera operators had already begun setting up, eagerly anticipating the proceedings ahead. Roger, a young magazine writer for GQ and the New York Times among others, did not expect this kind of attention. He knew lots of people, from bowling-alley-hanging teens to the Music & Amusement Association, were depending on him, but didn’t realize the whole country would be watching. Roger had been selected for this particular task not only for his knowledge and expertise, but for his legendary hand-eye coordination. He was there to prove that this was a game of skill, not chance. He was there to overturn the ban. He was there to save the game of pinball.

On January 16th, 1920, the 18th amendment officially went into effect, making the production, transportation, and sale of alcohol illegal in the United States. With that act of moral legislating, gambling became the next target. Coin-operated machines, usually associated with slot machines and betting horses, came under scrutiny. Pinball machines, with their recently-fitted coin mechanisms, became bright, and easy examples of “games of chance.” Politicians took to their pulpit to denounce pinball. Police raided parlors, bowling alleys, and bars that housed these machines. Politicians, literally wielding hammers, smashed these games to smithereens in a public show to illustrate that they too were “moral.”  On January 21st, 1942, Mayor Fiorello LaGuardia officially banned pinball in New York City and many other American cities soon followed suit.

Despite this ban, pinball designers continued to operate. While pinball was officially banned publicly, it was still legal to own machines for private use (not to mention rouge arcades and bars who placed pinball machines in dark corners in opposition to the bans). Companies like Gottlieb, Bally’s, and Williams proceeded to develop new innovations for their games, like double flippers, free balls, and electronic games. In fact, many localities regarded “free balls” different than “free games” and allowed pinball machines that had this feature to be used at public locations. In addition, the artwork on the machines became more elaborate and intricate, attracting new visually-impressed fans. Even in the shadow of the ban, the pinball industry had found a way to survive.

Which brings us back to the May morning in 1976 with Mr. Sharpe waiting patiently to enter the courtroom. He had been hired by the Music & Amusement Association (MAA, for short) to be their star witness in their pursuit to overturn the ban on pinball in New York City. Roger Sharpe, besides being a writer on the subject matter, was also a superb player himself, widely considered to be the best in country. He had been provided with two machines to prove his case, with one being a backup in the event that the first machine broke. While the MAA had been granted this hearing due to one committee member’s sponsored bill to overturn the ban, the other committee members were known to be against lifting the ban on pinball. The the MAA, the bill, and Mr. Sharpe were underdogs in this fight.

Upon entering the courtroom, Sharpe began eloquently to argue why the ban should be overturned, stating that while in the past, it may have been associated with gambling, this was no longer the case. It was a game that tested your patience, hand eye coordination, and reflexes. Quite simply, it was a game of skill, not chance.

As expected, Mr. Sharpe was asked to prove this assertion. Thus, he began to play one of the machines in the pinball game of his life.  But he was soon stopped by one particularly grumpy councilman. Afraid that the “pinballers” had tampered with the machine, he demanded that Mr. Sharpe use the backup. Sharpe agreed, but this added another degree of difficulty. You see, Mr. Sharpe was extremely familiar with the first machine, having practiced on it a great deal in preparation for this hearing. He was not nearly as experienced the backup machine.

Nonetheless, he agreed and began playing on the backup. Despite playing well with the weight of a giant silver ball on him, the grumpy council member was not impressed.  With the ban on the verge of not being overturned, Sharpe pulled a move that has become pinball legend.

Reminiscent of another New York sporting legend, he declared that if he could make the ball go through the middle lane on his next turn, then he would have proven that pinball is a game of skill- essentially, he was calling his shot, and staking the future of pinball on it.  Pulling back the plunger, he let that silver ball fly. Upon contact with a flipper, the ball zoomed up and down, through the middle lane. Just as Sharpe had said it would. He had become the Babe Ruth of pinball and, with that, proved that there was indeed skill to the game of pinball. The council immediately overturned the ban on pinball. By playing a “mean pinball,” Roger Sharpe had saved the game.