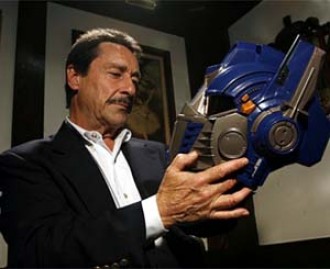 According to Cullen, he based the voice of Optimus Prime on his older brother Larry who was a captain in the United States Mariner Corps during Vietnam and who came back from the war significantly changed.  Cullen looked up to his brother and considered him a hero.  So, when given the opportunity to do the voice of a superhero, he modeled it after Larry, not just in voice, but also applying Larry’s post-war demeanor to the character.

Among his other voice acting work, Cullen also did the voice of Ironhide in the original Transformers series, KARR in Knight Rider, Zandar in G.I. Joe and a myriad of other characters in such shows as: Duck Tales, Alvin and the Chipmunks, The Adventures of Captain Planet, Teenage Mutant Ninja Turtles, Chip ‘n Dale Rescue Rangers, Garfield and Friends, Darkwing Duck, The Jetsons, and Gremlins, among many others.