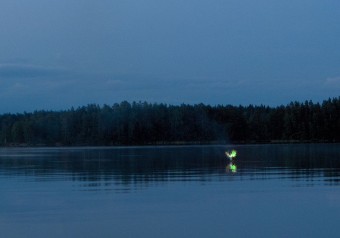 For those who don’t know, Will-o’-the-Wisps, also called “ignis fatuus,” Latin for “foolish fire”, are balls of light that are seen hovering over swamps at night and look similar to flickering lanterns, with the light often being blue in color.

Several theories exist as to its cause, including bioluminescence; that is, the glow is caused by something natural like fireflies or honey fungus. Another, somewhat oddball, theory is that barn owls might fly over swampy areas and reflect light from the moon or other sources off of their white plumage, making it look like a bobbing lantern.

However, one of the most accepted theories was more or less discovered by Allesandro Volta, who discovered methane in 1776. He believed that lightning mixed with the swamp gases caused the ghost lights. His theory was extremely controversial at the time and often disregarded because of the unlikeliness of spontaneous combustion and because the theory did not explain why Will-o’-the-Wisps appeared to retreat when approached.

With technological advances, we can prove Volta’s theory was more or less correct. Will-o’-the-Wisps are caused by burning gases—called “swamp gas” or “marsh gas”—that develops from the breakdown of organic matter in persistently wet areas. The movement of the wisps is usually disregarded and it is explained that the gases disperse when approached because of the movement in the air.

The normal decomposition of organic matter in open air is called “aerobic decomposition.” Like all organic matter, plants and animals are largely made up of carbon, hydrogen, and oxygen. When decaying in the presence of oxygen, the by-products of the decomposition are water, carbon dioxide, and energy, or heat.  In swampy or marshy areas, aerobic decomposition is often unable to take place. Instead, the dead matter is buried beneath water and saturated soil where it continues to decompose in the absence of air. The matter is broken down by anaerobic bacteria, the by-products of which are methane, carbon dioxide, nitrogen, phosphines, and other chemicals.

It is believed that, as the gases rise from the soil and water and escape into the atmosphere, the methane mixes with the phosphines and creates the blue lights seen hovering over the swamps. Phosphines are flammable, toxic gasses that can burst into spontaneous flame in the presence of air. As it burns, it produces a dense white cloud, which could give the flame more substance. Mixed with methane, the effect is the Will-o’-the-Wisps that inspired so many stories.

Stories and legends surrounding Will-o’-the-Wisps are present in nearly every culture. In Britain and Ireland, Will-o’-the-Wisps were spirits of the dead who used the lights to lure travelers into treacherous marshes. The spirits could not enter either heaven or hell, and spent their days wandering the earth. Their demeanors range from simply mischievous to malevolent, and they took pleasure in leading people astray and into dangerous situations. Some see Will-o’-the-Wisps as death omens, particularly when they are seen in cemeteries.

In Denmark, Will-o’-the-Wisps are called Jack-o-Lanterns. (See Whey Carved Pumpkins are called Jack-o-Lanterns for the origin of the name) They are said to be the spirits of unrighteous men, and the best way to guard against them is to turn one’s hat inside out. In the Netherlands, they are the souls of unbaptized children. They lead travelers to water so that they themselves can be baptized and enter the gates of Heaven, and it is taught that no one should neglect them. In German legends, Will-o’-the-Wisps particularly like tormenting drunks on their way home from the bar. When the drunks stumble and fall, the wisps will burn the soles of their feet. Some believe that you can make wisps disappear by throwing a handful of dirt from a graveyard at them.

In Argentina, the Luz Mala (evil light) is greatly feared. Traditionally, they believe that a white light represents a soul in trouble that needs a prayer. However, if the light is red, Satan is tempting the onlooker and it is recommended to flee immediately. In Bengal, Will-o’-the-Wisps are called Aleya, and are thought to be the souls of fishermen who died fishing and attempt to lure other fishermen to their deaths. In Mexico, they are the souls of witches. In Australia, the lights are called “min min lights” and follow people who see them. If the traveler follows the light instead, he will never be seen again.

All of the stories explain the lights as something supernatural. However, I think you’ll agree that the scientific theory for the cause of these cross-cultural ghost lights is a “slightly” more likely explanation. 😉