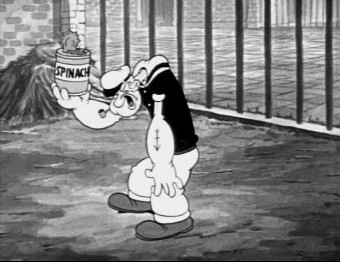 1) Popeye the sailor made his comic strip debut in January of 1929.  Popeye was originally just one of the many characters in a comic series drawn by Elzie Segar called Thimble Theater, which had been around for about 10 years before Popeye showed up.  Popeye was a one-eyed, 34-year-old (born in a typhoon in Santa Monica, California), semi-deformed-looking sailor with a severe speech impediment.  The Popeye character quickly became so popular, the strip was re-christened Thimble Theater Starring Popeye and then later just called Popeye, the same title it carries to this day.

2) The Popeye cartoon has given a few terms and words to the English language:

3) Although Popeye became a very popular comic strip character in his own right, it is as a movie cartoon star that most people know and remember him from.  Popeye’s first appearance on film was in a 1933 Betty Boop Paramount cartoon called Popeye the Sailor.  The Paramount Popeye cartoons were so popular that in 1937, the city of Crystal City, Texas, erected an official “Popeye” statue, marking the first time in world history a city had erected a statue in honor of a cartoon character.

4) The cartoon Popeye was originally voiced (1933-1935) by “Red Pepper Sam” (a.k.a. William Costello). Reputedly, Red Pepper Sam’s erratic behavior forced Paramount to fire him. He was replaced by Jack Mercer, and it is generally agreed that Mercer gave Popeye’s greatest performances.  (All three of the series’ main characters, Popeye, Bluto, and Olive Oyl were voiced by several different actors and actresses during the series’ run).

It wasn’t the actual Popeye “written, scripted dialogue” that got the cartoon’s biggest laughs.  Mercer, an inherently funny man, started ad-libbing “off-the-cuff” comments and asides during the Popeye recording sessions. These hilarious asides regularly got the cartoon’s biggest laughs.  At first, the studio was worried because Mercer’s ad-libs were not seen in the cartoon to be spoken by Popeye (his mouth didn’t move); they just seemed to be spoken out of thin air.  They soon realized the movie audiences didn’t care about the lip-syncing; they just loved the hilarious remarks.  The Popeye “asides and ad-libs” soon became Popeye’s trademark and most beloved feature.

5) In the comics, Popeye originally derived his great strength from rubbing the head of the Whiffle Hen.  This gimmick, of course, was soon changed to spinach (by 1932).  Spinach not only gave Popeye superhuman strength, but also endowed the sailor with abilities like virtuoso dancing or playing piano.  The Popeye cartoons were so popular during the Depression, sales of spinach in America increased by 33%, and it briefly slotted in as the third most popular kids food after ice cream and turkey. “Popeye” spinach is still the second largest-selling brand of spinach in America.

His love for spinach first showed up after he gets beat up and thrown into a spinach field. In a few cartoons, Popeye eats no spinach at all, but these are rare. In one, hospital patient Popeye force-feeds spinach to Bluto, so Bluto will beat him up and he can evoke sympathy from Olive. In another (semi-risque) cartoon, Olive Oyl actually eats the spinach so she can beat up a very sexy woman gym instructor who is flirting with Popeye (the gym teacher is based on Mae West).

6) In one cartoon, Popeye tells his nephews he is a descendant of Hercules and his ancestor originally got his strength from inhaling garlic.

7) During WWII, the Popeye cartoons reached new heights of popularity and were regularly used to boost U.S. morale, partially because a handful of Popeye cartoons during the war years were incredibly racially offensive towards the Japanese. For instance, in the cartoons, the Japanese are referred to as “jap-pansies” and portrayed with vicious, buck-toothed faces, sporting thick glasses.  A “banned” racist World War II Popeye cartoon called “Seein’ Red, White ‘n Blue” has the unique historical distinction of being the only Popeye where Bluto and Popeye join forces and gulp down a shared can of spinach to beat up on Japanese soldiers.

Some current television stations also edit out parts of the Popeye cartoons due to offensive, racist portrayals of African-Americans.

8)  During the war years, Popeye also made a clear cut wardrobe change.  Instead of Popeye’s customary skipper’s hat and black rolled-up shirt, Popeye made the switch to the all-white navy sailor’s outfit, complete with white sailor’s cap.  This outfit was to remain with Popeye through the run of the cartoon series, even after the end of the war.

9) In the wonderful animated film “Who Framed Roger Rabbit?”, a climactic scene at the end of the film features almost every famous, beloved cartoon character in animation history… except Popeye.  The curious omission occurred, not because they forgot about Popeye, but simply that Disney could not procure legal permission from Paramount studios to use the sailor’s likeness.

10) After the great Popeye cartoons ended by the late 1950s and in the early 1960s, a new, much-lesser series of “Popeye” cartoons was issued by King Features syndicate.  This series lacks any genuine humor and pales in comparison to the very funny original Popeyes.  These Popeyes range in “quality” from the “vaguely tolerable” to the much more common- “unwatchable”.  The producer of these lame latter-day Popeyes, Al Brodax, later produced the superior (but not great) Beatles TV cartoons in the mid-1960s.  Brodax’ greatest work occurred when he produced and co-wrote the Beatles’ wonderful, groundbreaking animated 1968 film “Yellow Submarine”.

11) In the comic, Popeye’s one-eye facial feature is attributed to “The mos’ ‘arful battle”.  It is later a bit unclear whether Popeye actually only has one eye or is just squinting (although in at least one cartoon, Bluto calls him a “one-eyed runt”).

12) In the original Thimble Theater comics, Olive Oyl’s boyfriend was “Ham Gravy”. He was soon dropped from the comic series because of Popeye’s skyrocketing popularity.  Despite the anorexic looking Olive Oyl eventually becoming Popeye’s girlfriend, in the Popeye comics and cartoons, Olive insults and berates Popeye regularly; is unfaithful routinely; and in general treats him like dirt.  In more than one Popeye cartoon, Olive actually hits, strikes, and/or beats the heck out of the luckless sailor.  Despite this and her lack of any sex appeal, Popeye’s undying love for Olive Oyl persists throughout the sailor’s career.

13) Popeye’s arch-nemesis, Brutus, was originally named Bluto, but this was changed for legal reasons. In a majority of Popeye episodes, Bluto is a clear-cut enemy and rival for Olive’s affection.  However, on many occasions, Bluto and Popeye start the cartoon out as “friends” and “pals”.  Bluto, however, inevitably double-crosses his “pal” on almost every occasion, causing one to wonder why Popeye doesn’t drop the guy out of his life and “list of buddies” like a bad habit.