What Does a Pap Smear Tell the Doctor?

January 16, 2013 Scott
Gina asks: What exactly is the doctor looking for when she takes a pap smear? 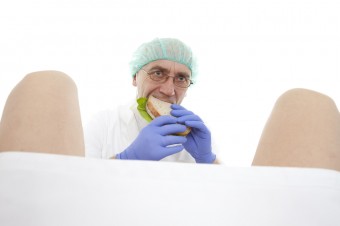 If you’re a woman, the term “Pap smear” probably makes the hairs on the back of your neck stand up. The very thought of putting the appointment on your calendar makes little beads of sweat begin to form on your forehead. Similar to getting a prostate exam, this test, while necessary, can be both uncomfortable and force you to break down all the walls of modesty you possess.

Named after Dr. George N. Papanicolaou, who, in 1928, found that cancer cells in vaginal smears could help Doctors find early stages of cervical cancer. The procedure, also known as cervical cytology, involves a women lying on the exam table in stirrups. The doctor places a tool, known as a speculum, into the vagina. The speculum then expands and allows the doctor a better view of your cervix. They then scrape away cells, put them on a glass slide and send them off to the lab for analysis. The pathologist looks at what are known as squamous cells to see if they’re normal, or possibly pre-cancerous.

The test, at first, was not taken seriously by many in the medical profession, most likely because Dr. Papanicolaous’ first study on the topic was full of typos and inaccuracies. In 1941, he did a much better job on a paper published in the “American Journal of Obstetrics and Gynecology”. The theory was then embraced by OB-GYN’s and the American Cancer Society, who started promoting the test. It has become so popular, as of 2005, 86% of women age 18-64 had at least one Pap test in the previous 3 years.  Forty years ago cervical cancer was the leading cause of cancer deaths among women. Thanks to this screening technique, those death rates have decreased dramatically, though in 2008, it was still the third leading cause of cancer in women, accounting for 8.8% of cancers.

What doctors are looking for are abnormal squamous cells. Unlike other cells in the body that are square (cuboidal) or rectangular (columnar), these cells are flat. Coming from the Latin word “squamosus”, meaning scales, they resemble the scales on reptiles. These types of cells are found in numerous areas of the body, like the mouth/lips, in the outer layer of your skin (epidermis), and on the cervix. Any squamous cell can become cancerous. In fact, Squamous cell carcinoma accounts for 20% of all skin cancers.

When the pathologist looks at the cells from your cervix to determine your risk of cancer, they use a system known as the “Bethesda System” (named after Bethesda, Maryland where it was developed). Depending on how the cells look, they put them in 5 main groups:

If your doctor gets the test results back and it falls into any category other than “within normal limits”, they may choose to do follow-up pap smears, or colposcopy (taking a magnified look at the cervix). They could also perform DNA testing to look for high-risk types of human papillomavirus (HPV).

HPV is the most common type of sexually transmitted disease. The CDC reports that approximately 50% of the US population will be infected by one of these viruses in their lifetime. It has been shown that approximately 30 of the over 100 types of HPV cause cancer. In 2000, the FDA approved a test to detect the DNA of HPV, and in 2006 a vaccine for the virus was approved.

This knowledge has led some people to think the Pap smear, as a means of detecting cervical cancer, will be phased out over time. This idea is extremely controversial. Currently most doctors use the Pap smear in conjunction with an HPV test, or carry out HPV testing if the Pap smear comes back abnormal. The controversy over how to use HPV testing in conjunction with Pap smears will remain for years to come. Time will tell what common practice will be, but I’m sure most women won’t mind not having that cold instrument shoved in there special “no-no” region.

If you do get diagnosed with cancer, you will be put in one of 5 categories, 0-4.

While the Pap smear can be uncomfortable and make you feel a bit embarrassed, get one- especially if you are sexually active! It might just save your life. Since we mentioned it at the beginning…. boys, get a prostate exam as well! (If you’re over 40 that is.)