10 Fascinating Facts About The Earth 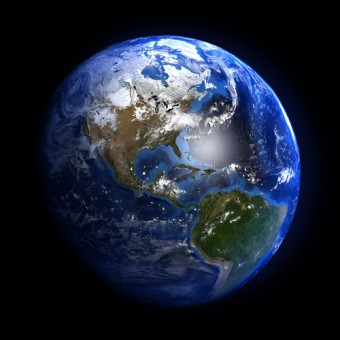 3. The Earth isn’t perfectly spherical in shape.  The combination of gravitational and centrifugal forces, along with the tilted axis of the Earth have resulted in a bulge of mass around the equator. Therefore the Earth’s shape is classified as an oblate spheroid or ellipsoid. The polar diameter of the Earth is about 26.7 miles (43 km) shorter than its equatorial diameter causing a difference of about 0.3%. This very slightly oblate shape affects the weight of an object according to its position on the Earth’s surface. For example: A 20-lb bag of sand would weigh less at the equator than at the North Pole. This is because the further an object gets from the center of the Earth, the less it weighs. If the Earth were a perfect sphere, then objects would weigh exactly the same  anywhere on Earth.

4. The Earth is hottest when it is furthest from the Sun on its orbit, not when it is closest. During the period when the Earth is furthest from the Sun (aphelion- in July when the Earth is at around 94.8 million miles/ 152.6 million kilometers away from the Sun), the average temperature of the entire planet is about 4°F (2.3°C) higher than when it is closest to the Sun (perihelion- in January when we are at about 91.1 million miles /146.6 million kilometers away  from the Sun). On average, the intensity of sunlight falling on Earth during aphelion is about 7% less than during perihelion. Despite this, the Earth ends up being warmer during the period in which it is furthest away from the Sun. As you might have guessed then or already known, the seasons are not caused by the distance the Earth is from the Sun, but rather are caused completely by the fact that the Earth is tilted on its axis 23.5°. This is why when it’s summer in the Northern Hemisphere, it’s winter in the Southern Hemisphere, and vice-verse.

7. The Earth’s solid iron core, is surrounded by a fluid ocean of hot, liquid metal, that creates electric currents and consequently generates a magnetic field.  The magnetic North Pole,  first located in the early 19th century, has moved more than 600 miles (1,100 kilometers) northward since then. In the early 20th century it was estimated to have been migrating at about 10 miles (16 km) per year and is said to be moving even faster now at about 40 miles (64 km) per year in a northward direction.

8. About 800,000 years ago if you were to have stood facing what we call North now (by compass), you would actually have been facing South. The widely believed hypothesis states that there was once a pattern of 200,000 to 300,000 years when the polarity of the Earth’s magnetic field reversed. During this long process, the magnetic poles slowly start migrating away from the axis around which our planet spins, and eventually get flipped around reversing the poles. Although this reversal is speculated to have occurred a number of times in the history of the Earth (about every 300,000 years), it has been over twice that long since the last one, leading many to speculate we’re due for one sometime within the next couple thousand years or so.  A reversal today may have dire consequences for life on the surface of the planet as some theorize that the magnetic field will decrease to almost nothing for a time during the interim of the switch.  If this happens, ionizing radiation from the Sun will become a major problem for humans and many other life forms.  That being said, other scientists think this isn’t likely and that the magnetic field will simply become “more complicated” during a switch with “magnetic lines of force near Earth’s surface [becoming] twisted and tangled, and magnetic poles [popping] up in unaccustomed places. A south magnetic pole might emerge over Africa, for instance, or a north pole over Tahiti. Weird. But it’s still a planetary magnetic field, and it still protects us from space radiation and solar storms.”  This idea is backed by the fact that the magnetic switches throughout Earth’s history don’t seem to have every correlated with mass extinction of animal life on the surface of the planet.

9.   As alluded to, gravity on the Earth is not uniform. In March 2002, the GRACE (Gravity Recovery and Climate Experiment) mission was launched by NASA to accurately map variations in the Earth’s gravity field. The mission involved two identical spacecrafts that flew about 220 kilometers apart in a polar orbit 500 kilometers above the Earth. According to NASA, the studies of this mission showed gravitational differences “due to surface and deep currents in the ocean; runoff and ground water storage on land masses; exchanges between ice sheets or glaciers and the oceans; and variations of mass within the Earth. “

10. According to a paper published in the journal ‘Nature’, scientists theorized that at one point the Earth may have had two close orbiting Moons. Outlined in the research paper, they explain just as the Moon was created some 4.5 billion years ago most likely from debris accreted, when a Mar’s-sized object collided into Earth, a smaller sister moon made of the same rocky debris was also formed. This smaller moon was believed to have eventually had a slow-moving collision with the bigger Moon. The slow speed collision could have been forceful enough to plaster debris from the companion moon to the larger moon, rather than a fast collision that would have caused a crater or displayed signs of melting rock from the impact.

tagged with earth facts, facts about the earth