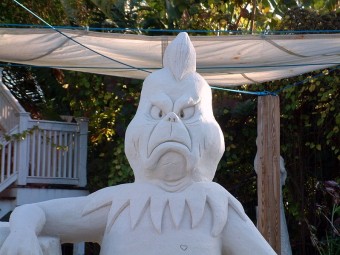 Today I found out the guy who did the voice for Kellogg’s Tony the Tiger also sang the iconic “You’re a Mean One, Mr. Grinch” song in Dr. Seuss’ How the Grinch Stole Christmas.

The man was Thurl Ravenscroft.  Ravenscroft originally went unintentionally uncredited in the film.  Because of this, a common misconception rose up that it was Boris Karloff, the narrator of the movie, who did the singing for the song.

Theodore Geisel (Dr. Seuss) himself tried to rectify the issue by writing letters to various journalists explaining the oversight and asking if they mention the movie and song, that they give Ravenscroft proper credit.  He also called Ravenscroft and apologized for the mix up.

Over his 65 year career as a voice actor, before his death in 2005 at the age of 91 from prostate cancer, Ravenscroft accumulated quite the portfolio besides the Tony the Tiger voice and singing in How the Grinch Stole Christmas. He lent his vocal talents to such films as Dumbo, Alice in Wonderland, Peter Pan, Lady and the Tramp, Sleeping Beauty, 101 Dalmatians, The Sword in the Stone, Mary Poppins, The Jungle Book, Horton Hears a Who!, The Hobbit (cartoon), The Brave Little Toaster, and many, many more.  He also can be heard even today on numerous rides in Disney Land and Disney World, including the the Pirates of the Caribbean, Tiki Room, and Haunted Mansion rides.

If you liked this article, you might also be interested in:  Dr. Seuss Wrote “Green Eggs and Ham” on a Bet that He Couldn’t Write a Book with 50 or Fewer Distinct Words, and Other Interesting Dr. Seuss Facts