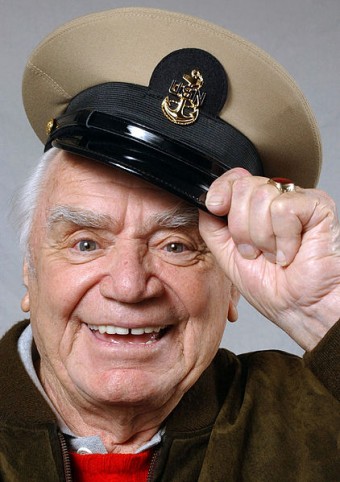 As someone who’s been lucky enough to work in movies and is a gigantically huge movie fan on top of that, I was saddened this last July by the death of the great Ernest Borgnine.  One of Hollywood’s last genuine legends, Ernest passed on at the ripe old age of 95, looking not a day older than 70, on July 8, 2012.  I thought I’d write up a quick little article outlining the man, and hopefully include a few interesting Ernest Borgnine facts you might not know.

As an actor, Ernest gave legendary and brilliant performances in “Bad Day at Black Rock” (1955), “From Here to Eternity” (1953), “The Dirty Dozen” (1967), and “The Wild Bunch” (1969), along with dozens of others.  Although he specialized in playing bad guys in his early films, he gained true movie immortality by playing a shy, withdrawn butcher in “Marty” (1955), a true classic and one of the most intimate films to ever win an Academy Award.  (Ernest himself earned his one and only Academy Award for “Best Actor” as the title character in “Marty”.)

He also had a very successful career on television, starring in “McHale’s Navy” (1962-1966), as well as “Airwolf”, besides making many great guest appearances in such series as “Get Smart”, “The Simpsons” and “Magnum P.I.”.

With that introduction out of the way for those not familiar with Borgnine, let’s take a look at a few facts you may not have known about Mr. Ernest Borgnine: