Famous People and Their Unusual Pets 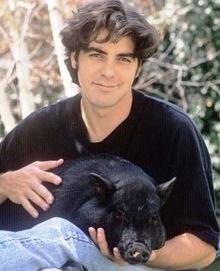 1) George Clooney was given a pet Vietnamese black bristled potbelly pig named “Max” by his then girlfriend, Kelly Preston.  George loved Max and not only was the pig allowed in the house, but Clooney also stated the 300 pound pig often liked to sleep in his bed with him.

2) Actor John Barrymore had a pet vulture named Moloney. Moloney would sit on Barrymore’s lap and “kiss”. (It liked to rub noses with him.)  John also owned many other birds as well as an opossum, a kinkajou, a mouse deer, six dogs, and a monkey who often bit people, which ultimately resulted in him giving it to a zoo.  The vulture was his favorite though.  But he also ultimately gave that away.  He recounts the tail as follows:

My home was broken up by divorce and I didn’t want to live there.  The pet shops could have the other birds (he owned many others), but I felt Moloney was too good a friend for such a fate.  So I said to myself, ‘We’ll find a nice jungle for Moloney.’

We boarded the yacht- Moloney and I- and we told the crew to keep going until we came to a jungle.  Some place off the coast of South America, several days later, we spied a lovely jungle.  It was late afternoon, but I decided we’d better have it over.  I had the sailors row us- Moloney and I- to shore.  I took Moloney out of his cage.  It was a folding cage, so I folded it up and threw it in the ocean.  We had an affectionate farewell.  He flapped his wings and I detected a note of despair in his voice.  I cried, because I was leaving my old friend…

I watched poor Moloney as I was rowed back to the yacht.  He shuffled around like Bert Williams, but mostly he stood still, looking at me.  The next morning, when we were getting ready to steam away, I looked toward the shore and saw a black spot.  I grabbed the glasses.  It was Moloney!  He was standing right where I’d left him.

I was rowed back to shore.  When Moloney saw me, he flapped his wings and squeaked with joy.  He rubbed his beak against mine.  What a reunion!

I thought he’d fly off into the jungle, but he didn’t know what a jungle was.  He couldn’t fend for himself.  He doubtless had been born in captivity.  I couldn’t recover the cage, so we had to build a new one.  Sure, I had to bring him back home with me.  You can’t just desert a friend and leave him to die.  I gave Moloney to some zoo and for all I know he’s still there. (This was from an interview in 1939.)

3) King Alexander of Greece was at his Tatoi summer estate when a monkey that lived on his estate attacked him, biting him on the legs and stomach area.  This event ended up being the death of him, as the wounds became infected, which resulted in septicemia.  He died just 23 days after being bitten.

4) Mike Tyson has owned three different tigers.  As to why he likes tigers, “I’m in prison and I’ve got this big deal with Showtime and the MGM (upon his release). I am loaded. This guy on the phone says, ‘You can be driving your Ferrari with your cub in the front seat.’ I thought, ‘Yeah, when I come out, I’m gonna be a cool dude. I’m gonna have a tiger in my car. I’m gonna be a baller.’ ”

6) Teddy Roosevelt loved hunting, but once refused to shoot a bear that had been severely injured and tied up. This incident is reputed to have inspired the “teddy bear”. Roosevelt loved animals and among his many pets were a zebra, a coyote, and a hyena.

7) As a young actress, Elizabeth Taylor had a pet chipmunk named “Nibbles”.  In 1946, she wrote a book called Nibbles and Me.

8) Paris Hilton had a pet rat and used to own a pet honey bear.  The bear was confiscated because it is illegal to keep a bear as a pet in California.

9) Hugh Hefner has a zoo license. Among his many pets are peacocks and spider monkeys.

12) Kubla Khan owned the largest number of dogs ever by a single person. He reportedly had over 5,000 Mastifs.

13) President John Quincey Adams had a pet alligator given to him by the Marquis De Lafayette.

15) Angelina Jolie had a female pet rat named “Harry”. She reportedly sometimes took baths with it.  Others who’ve owned pet rats at one time or another include Clint Eastwood, John Cleese, Grace Slick, and Pink, who owns two rats- Thelma and Louise

16) Kim Basinger has hermit crabs, amongst her 21 pets