This Day In History: November 4 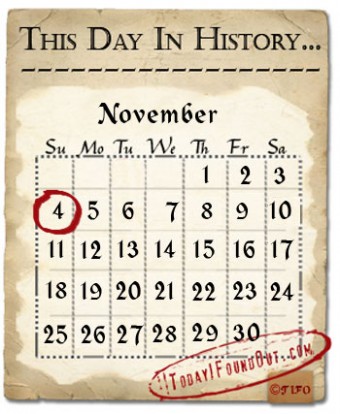 On this day in history, November 4th…

1842 : Abraham Lincoln married Mary Todd, at the Edward’s home (her sister’s place) in Springfield, Illinois. Nicknamed Molly, Mary Todd first met Lincoln in 1840 when she was 21 and he was 31. Her family wasn’t too happy about the relationship because of Lincoln’s poverty & lack of political prospects. Nevertheless, she accepted his proposal and they were engaged. In 1841, they broke off the engagement and were separated for a while, till the fall of 1842. It was then, with the help of mutual friends (Mr. and Mrs. Simeon Francis), that the couple reunited and wasted no time in getting married (married after just 1 day back together, in fact).  Some speculate the rush was because Todd was pregnant with their future child Robert Todd Lincoln, or that Todd had seduced Lincoln into having sex with her, then forced him to marry her the next day.  There is no direct evidence of this, but Lincoln’s best man stated on Lincoln’s wedding day, he “looked like a man going to the slaughter” and it was reported that he also referred to his bride to be as “the devil” on the way to his wedding.  Their marriage was rocky right from the start and never seemed to get better.  Once, after a man sought retribution with Lincoln over his wife’s behavior (including beating the man with a broom), Lincoln said to him “Taggart, I’ve been putting up with her for the past 15 years, can you not put up with her for just 5 minutes for our friendship’s sake?”

1846 : The first artificial leg was patented by Benjamin Franklin Palmer of Meredith, New Hampshire. Although there had been ideas of artificial limbs and a few prototypes of prosthetic legs in the past, for the most part, peg legs were still primarily  in use by amputees. In 1939, a new  prosthetic leg that lifted the toe when bending the knee with the use of artificial tendons, was designed by James Potts. Three years later, Benjamin Palmer added an anterior spring and smooth appearance by eliminating large unsightly gaps between the various components of his artificial leg. It made the prosthetic simulate and gave the articulated joints at the knee, ankle, and toe a more natural looking movement. He received a patent (no: 4,834) for the artificial leg, the first of its kind in the U.S.  Palmer’s artificial leg also received an award at the first World’s Fair at the Crystal Palace in London England in 1851.

1922 : British archaeologist, Howard Carter, discovers the entrance to King Tutankhamen’s Tomb. Although most of the ancient Egyptian tombs in the Valley of the Kings had been discovered well before his time, archaeologist Howard Carter was determined to find out more about the little-known child king (he was 9 years old and died at age 19), King Tutankhamen, also known as ‘King Tut’. His search paid off as his team found the hidden steps that led to a burial room near the entrance to the tomb of Rameses VI. It wasn’t until several years of excavation later that they realize what they had actually stumbled upon- the nearly intact tomb of the Pharoah with his remains inside a solid gold coffin nested within a stone sarcophagus that had lain undisturbed for over 3,000 years.

1955 : Major League Baseball pitcher, “Cy” Young Died.  Denton True “Cy” Young had a successful 22-year baseball career (1890–1911) in which he pitched for five different teams (The Cleveland Spiders, St. Louis Perfectos, Boston Americans / Red Sox, Cleveland Naps and the Boston Rustlers).  In 1912, Cy Young retired with 511 career wins, which remains the record for most career wins by a pitcher, and went and lived on his farm in Ohio. 26 years after his retirement from baseball, Cy was  inducted into the Baseball Hall of Fame. He died at the ripe old age of 88, after which the Cy Young Award was created  in his name to honor the previous season’s best pitcher in each league.

2008 : America elected its very first African-American President to the White House- Barack Obama. A former University of Chicago Law Professor, Obama launched his political career in 1996.  He was first elected to the Illinois State Senate and from there gained national stature by winning the U.S. Senate Democratic primary in Illinois in 2004. That year, he also got elected to the U.S Senate with a landslide win. In 2007, he beat out Senator Hillary Clinton (former First Lady to President Bill Clinton) of New York to run as Democratic nominee for the presidency.

tagged with november 4, this day in history