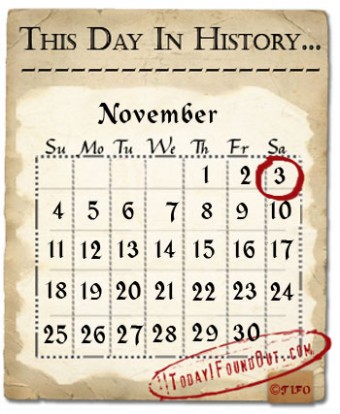 On this day in history, November 3rd…

1534 :  King Henry VIII of England was granted Royal Supremacy, as the English parliament accepted the first Act of Supremacy. This legislation declared the King as the supreme head of the Church of England. It also initiated by King Henry VIII himself and cut England off from the Roman Catholic Church. It is believed that the main motive behind such a move was to obtain an annulment of the King’s marriage to Catherine of Aragon, because Catherine had not produced a son and heir and because Pope Clement VII refused to grant him an annulment. This first Act of Supremacy was also the start of the English Reformation.

1913 : Personal Income Tax was made a permanent fixture in the United States Tax System by the ratification of the 16th Amendment to the Constitution. These taxes were initially meant to raise money for the American Civil War, just as Great Britain had levied income taxes in 1799 to pay for troops and supplies to defeat Napoleon’s French army. Before the amendment was ratified, all federal taxes had to be based on state population and the income tax law was found unconstitutional by the U.S. Supreme Court in 1895. Today, the IRS collects more than $2.5 trillion in taxes annually with about 10% of that collected from individual taxpayers.

1956 : CBS-TV televised the “Wizard of Oz” for the first time. The TV networks paid MGM (Metro-Goldwyn-Mayer Pictures) a whopping $225,000 for the rights to televise the film and to re-broadcast it if the telecast was a success. Needless to say, it was a huge success and the 1939 Technicolor musical fantasy film has since become one of the most popular American Films ever made.

1957 : A dog named Laika became the first  animal to ever enter orbit.  The Soviet Union’s spaceship Sputnik 2  or ‘Prosteyshiy Sputnik 2’ was the second spacecraft launched into Earth’s orbit on this day. Laika was a terrier  formerly named Kudryavka (Little Curly) and was selected from over 10 other candidates because of her temperament. Sources later revealed that the dog was believed to have died after only a few hours from overheating & stress. The mission had originally planned on euthanizing the dog by poisoning her food as she would have burned up in the atmosphere during reentry anyway.