This Day In History: November 2 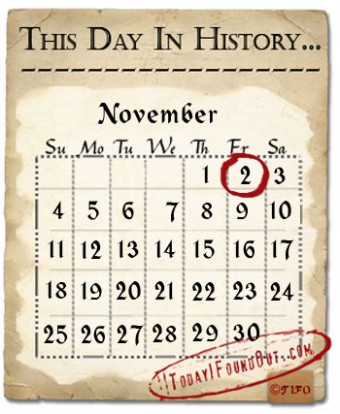 On this day in history, November 2nd…

1898 : Marks the official birth date of organized cheerleading. On this date, student Johnny Campbell of the University of Minnesota directed a crowd at a football game into cheering “Rah, Rah, Rah! Ski-u-mah, Hoo-Rah! Hoo-Rah! Varsity! Varsity! Varsity, Minn-e-So-Tah!” From then, the University of Minnesota organized a “yell leader” squad of six male students to lead the crowd at football and basketball games, which in turn led to an all male cheer fraternity called Gamma Sigma.

1936 –  World’s first ever high-definition TV service is launched by the British Broadcasting Corporation (BBC) in London. On this day the BBC Television Service at Alexandra Palace, London, transmitted its first public broadcasts on with Leslie Mitchell announcing. They used  two competing systems the Marconi-EMI’s 405-line system and Baird’s 240-line system with their own broadcasting studios  that transmitted on alternate weeks. After testing both systems  the Baird’s 240-line system was scrapped in 1937 in favor of the 405-line system. In 1964, the BBC TV channel was renamed BBC1 (now spelled out as BBC One) and it still runs today.

1947 : Howard Hughes pilots  the largest aircraft ever built, the H-4 Hercules also known as, the “Spruce Goose”.  The massive Flying Boat style aircraft was built from wood (Birch & Spruce) laminated with plastic and covered with fabric, because during the World War II there were restrictions on the use of aluminum.  The aircraft had a wingspan of 320 feet (longer than a football field) and was powered by 8 giant propeller engines. It was designed to carry over 700 fully equipped troops to battle. The  $23 million, H-4 Hercules  prototype proved flight worthy as it lifted off from the channel facing Cabrillo Beach, California at only 70 ft off the water with a speed of 135 miles per hour. The unannounced test flight of the Spruce Goose lasted a mile before landing. The Spruce Goose never flew again, nor did it go into production, because of costs and the fact that critics believed the framework couldn’t possibly support its weight on long flights.

1964 : Prince Faisal was proclaimed king of Saudi Arabia after dethroning his half brother King Saud by way of a family coup. Faisal bin Abdulaziz Al Saud was crown prince, prime minister, and half bother to the reigning King Saud at the time.  There was a long ongoing power struggle with the King, Prince Faisal and Prince Faisal took advantage of the King’s absence in the country due to medical reasons, to remove his loyalists from power and replace them with his own supporters. Backed by the royal family, the Prince demanded that the King’s role be reduced to a merely ceremonial one. The King refused and tried to take back his executive duties, but Prince Faisal ordered the National Guard to surround King Saud’s palace. With his loyalists outnumbered and outgunned, King Saud had no choice but to step down and give up the throne to his brother. The dethroned King was sent into exile to Greece and King Faisal ruled the Kingdom Of Saudi Arabia from 1964 to 1975.

2000 : Crew  for the first long-duration stay on the ISS (International Space Station) docks aboard the Russian spacecraft Soyuz TM-31. This was the day marked as the official start of ‘Expedition-1’ where a three person crew consisting of an American commander (Bill Shepherd) and two Russians crew (Yuri Gidzenko and Sergei K. Krikalev)  stayed on board the Space Station for a total of  four and a half months (136 days). During their mission, they were said to have unpacked equipment that had been delivered, activated and worked on various systems on board the station, as well as hosted three visiting Space Shuttle crews and two unmanned Russian Progress resupply vehicles.