This Day In History: November 1 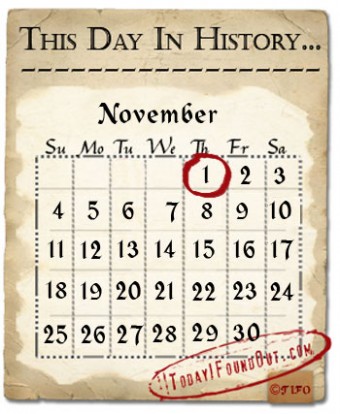 On this day in history, November 1st…

1512 : Michelangelo’s epic ceiling painting in the Sistine Chapel was opened to the public for viewing for the first time. Michelangelo Buonarroti, born in 1475, first came to the spotlight as a talented sculpture during the early Renaissance movement in Florence. His famous statues of  Pieta (1498) and David (1504) earned him a call from Pope Julius II to the Vatican in Rome, commissioning him to paint the ceiling of their most consecrated space- The Sistine Chapel. In 1508, Michelangelo began painting the 40 meters (131 feet) long by 13 meters (43 feet) wide ceiling, with a series of complex decorations and figures depicting biblical stories. The most famous being The Creation of Adam, a painting in which the arms of God and Adam are stretching toward each other. He finished his work in 1512 and on the 1st of November of that year, his ceiling frescoes were exhibited to the public making it one of the most memorable artworks of all time.

1938 : Dubbed “the match of the century” in horse racing, Seabiscuit defeated Triple Crown winner War Admiral at the Pimlico Race Course in Baltimore, Maryland. As any classic underdog story goes, Seabiscuit was an undersized, knobby-kneed horse who was probably the butt of most stable jokes. It wasn’t until Seabiscuit won 2 races at Narragansett Park, setting a new track record in the second, that he begin getting some attention. Together with Tom Smith (trainer) and  Red Pollard (jockey), Seabiscuit rose up the racing ranks winning races and gaining a name in horse racing circuit. Pollard was later replaced by George Woolf after sustaining considerable injuries due to a terrible fall while riding another horse. On November 1st 1938, Seabiscuit along with his jockey Woolf, won over the horse racing favorite and Triple Crown Winner “War Admiral” in an upset victory at Pimplico, earning him the title of American Horse of the Year for 1938. An unlikely champion, Seabiscuit became a symbol of hope to many during that time and inspired a couple of films and books, including the Academy nominated movie “Seabiscuit” of 2003 featuring Tobey Maguire as Red Pollard.

1952 :  The world’s first thermonuclear weapon, the hydrogen bomb, is tested on Eniwetok atoll in the Pacific.  The hydrogen device was first conceptualized by physicist Edward Teller and mathematician Stanislaw Ulam  and was later turned into an experimental device code-named “Mike” in October, 1951. This atomic device was so large (20 feet long)  that a balcony had to be built to view the full-scale drawing of the device. To test this new thermonuclear device,  “Mike” was remotely detonated on Eniwetok Atoll, about 3,000 miles west of Hawaii in the Marshall Islands. The cloud caused by the bomb was said to have been 100 miles wide and the detonation left behind a crater more than a mile wide.

1955 : Man blows up United Airlines Flight 629 in a plot to kill his mother, for her insurance payoff. The four-engine prop DC-6B aircraft carrying 44 passengers from Stapleton Airport in Denver, Colorado was bound for Portland, Oregon when it crashed just 11 minutes after takeoff. 39 people were instantly killed in the crash, while the rest later succumbed to injuries leaving no survivors. Upon investigations by the FBI, it was discovered that Jack Gilbert Graham had planted a homemade dynamite bomb in his mother Daisie E. King’s luggage which went off in cargo pit number four. It was learned that upon the death of his mother, Jack Graham was to receive a substantial inheritance which was the motive behind her murder and the unfortunate death of the 44 persons aboard the plane .

1993 : The Maastricht Treaty (also known as -Treaty on European Union (TEU)), establishing the European Union (EU) came into effect.  In 1991,  the members of the European Council  (i.e the heads of state or government of the 27 EU member states) drafted the treaty which was later signed on 7 February 1992 in Maastricht, Netherlands. The treaty was then put into force on 1 November 1993 during the Delors Commission. It is this treaty that led to the creation of the euro, and created what was commonly referred to as the pillar structure of the European Union.