On this day in history, November 15th… 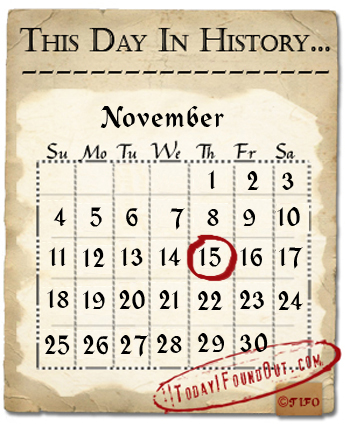 1859 :  An attempt to revive the Olympic Games first took place in Athens, Greece. The ancient Olympic Games were a symbol of  ancient Greek traditions and they were always held in Olympia until emperor Theodosius I suppressed the games  in 394 AD. While there were many attempts made to revive the Olympic games in the early 19th century, it wasn’t until  Panagiotis Soutsos made a formal proposal to the King to bring back the games in 1835 that the topic actually get some widespread notice. King Otto of Greece accepted the proposal but the Greek government did nothing about it for 26 more years, despite Soutsos’ persistent campaigning . In 1956, a Greek businessman by the name  Evangelis Zappas was so inspired by Soutsos’ resolve to revive the games that he offered to fund the entire event, including cash prizes for winners. Although there was no opposition to Zappas funding an Olympic Games, the Greeks were concerned with other nation’s perception of them reviving the antiquated Olympics, perhaps making them look stuck in the past. So there was some delay over the matter. Finally King Otto agreed on allowing the games to be held every four years with Zappas’ full sponsorship. The first of this revived sporting event started on November 15th, 1859 in Athens, Greece, it was called the Zappas Olympics. But, unlike the Olympics as we know it today, it wasn’t an international event, but rather, comprised mostly of Greek Athletes from within the state and from the Ottoman Empire.

1889 : Brazil’s last Emperor, Pedro II, was deposed, marking the end of  Brazil’s monarchy. Brazil had its own indigenous monarchy for almost 90 years until the Portuguese King João VI, along with his court, invaded its colony Brazil, fleeing from Napoleon’s attack on Portugal.  They set up a base in Rio de Janeiro. When the king finally left Brazil to return to Portugal, his son Pedro I proclaimed himself the ruler of the independent Brazil. This didn’t go over very well and proved to be a rough start for Brazil under his rule. Things got better when he abdicated his throne in favor of his then 5 year old son, who ended up being a much more capable leader when he came of age in 1841.  Nicknamed “the Magnanimous”, Pedro II reigned for almost 5 decades, stabilizing Brazil’s troubled economy and growing it substantially. However, there was still growing unrest among the urban middle class and the military, sectors he had ignored. On November 15th, 1889, Manuel Deodoro da Fonseca headed a military coup to depose the King and declared Brazil a Republic. He later went on to be elected first president of the Republic of Brazil.

1969 : Dave Thomas opened the first ‘Wendy’s Old Fashioned Hamburgers’, now simply known as ‘Wendy’s’,  on November 15, 1969.  A high-school dropout, Dave Thomas met Colonel Sanders, the founder of KFC, when he was working at the Hobby House Restaurant  in Fort Wayne, Indiana. Years later, after serving as a cook in the army during the Korean war, Thomas got a managerial position over four of Colonel Sanders’ KFC’s that were failing. Working with Sanders, his ideas helped not just KFC, but fast food chains in general, revolutionizing the way fast-food chains would plan their menu’s. (Read More about that in: The Founder of Wendy’s Helped Save KFC and was a High School Dropout). After he turned those failing KFC restaurants around, he then sold his stake in them back to Colonel Sanders for a significant profit over what he originally paid, receiving $1.5 million in the sale. Taking that money, he opened his own chain of ‘Wendy’s Old Fashioned Hamburgers’; named after his fourth child, Melinda Lou Thomas who was nicknamed Wendy. Today, Wendy’s operates about 6,600 restaurants in the United States and abroad and is dubbed the third largest “hamburger” fast food restaurant in the world. Unfortunately, the company was forced to shut down the original restaurant in Ohio, on March 2, 2007 due to sagging sales.

1984 : First baboon-heart transplant recipient “Baby Fae,” a month-old infant died. On October 26, 1984, Dr. Leonard Bailey at California’s Loma Linda University Medical Center, had no viable options to keep a 2 week old premature infant with a hypoplastic heart alive, other than to try an inter-species organ transplant. Infant hearts are rarely available for transplants and the Doctor proposed an experimental procedure using a baboon’s heart. This type of animal-heart  transplant had only been done thrice before and none of the patients had survived more than 4 days. The parents agreed to the experimental procedure and the baby, only known as ‘Baby Fae’ to protect her real identity and that of her parents, became the recipient of a healthy walnut-size heart of a young baboon. She made it through the procedure and was stabilized with the heart functioning on its own. The story made headlines and started controversies all at the same time. With the help of the drug cyclosporine that  inhibited foreign tissue rejection, Baby Fae was able to hang on and live for 20 more days, the longest surviving recipient of an animal heart. Unfortunately, her body was fighting to reject the animal organ and the doctors had to increase the dosage of the  immuno-suppressive drug causing her kidneys to fail and ultimately her heart to stop.

tagged with November 15, this day in history