This Day In History: November 14

On this day in history, November 14th… 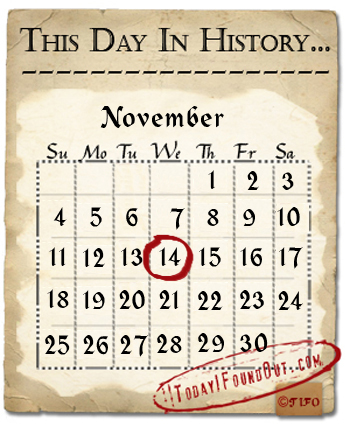 1851 : Harper & Brothers, New York published Herman Melville’s novel “Moby-Dick” or “The Whale” as a single volume. Inspired by real life white whale called ‘Mocha Dick’, that destroyed over 20 whaling ships and reportedly survived encounters with another 80 or so, Melville wrote the story through the eyes of a wandering sailor Ishmael about his adventures on the whaleship ‘Pequod’. The book was first published a month earlier in London, as a three-volume edition titled “The Whale”. Then on November 14th, 1851 the book was published in the United States as a single-volume novel. The book received mixed reviews and never really got the literary acclaim Herman Melville expected, at least not when he was alive anyway. After Melville’s death in 1891,  the publishing company re-printed some of Herman’s work hoping they would be rediscovered again. ‘Moby-Dick’ was among the four novels re-printed which also included the Bestseller ‘Typee’,  ‘Omoo‘ and ‘Mardi’, the last of which wasn’t very successful either. The second time around, ‘Moby-Dick’ got more recognition among literary circles, but it wasn’t until the 1920’s that critics really began to take notice of Melville’s book. It was then that the book was called ‘a pinnacle of American Romanticism’. Today, ‘Moby-Dick’ is considered one of the greatest novels in the English language and is recognized as an American Classic.

1889 : Elizabeth Cochrane (better known by her pen name ‘Nellie Bly’) began her trip around the world, to turn the fictional story “Around The World In 80 Days” by Jules Verne into fact. Cochrane wrote a strongly worded letter to the editor of the ‘Pittsburg Dispatch’ regarding a misogynistic column they had, signing the letter with “Lonely Orphan Girl”. The editor actually loved Cochrane’s writing and spirit so much that he wanted the ‘man’ who wrote it, to come join the paper. However, he withdraw his offer after finding out that Cochrane was a woman, but she somehow persuaded him into giving her a chance anyway. So she started writing under the pen name ‘Nelly Bly’ which the editor misspelled as ‘Nellie Bly’ and the error stuck. In 1888, she discussed with her editor at ‘New York World’ an idea to write a story and beat the fictitious character ‘Phileas Fogg’ in Jules Verne’s book “Around the World in 80 Days” by actually accomplishing the feat in less than 80 days. The story became so big that competing New York newspaper “Cosmopolitan” sent its own reporter, Elizabeth Bisland, to race Nellie Bly,  by going in the opposite direction as Bly.  So on November 14th, 1889  Bly set off on a steamer headed to Europe, while Bisland departed westward from New York, on a 24,899-mile race around the World. Bly beat both the fictional ‘Phileas Fogg’ from the book and Bisland for a total travel time of 72 days, 6 hours and 11 minutes. Bisland completed her trip four and a half days later.

1969 : Apollo 12, the second manned mission to the Moon was launched by NASA. This was four months after Apollo 11 was launched, the first mission to the moon in which American astronauts Neil Armstrong and Buzz Aldrin became the first to step onto the moon. Attended by President Richard Nixon, Apollo 12 launched with astronauts Charles Conrad, Jr.; Richard F. Gordon, Jr.; and Alan L. Bean aboard along with the first color television camera to capture the lunar surface. Thirty-six and a half seconds after take-off, the mission encountered its first hiccup, when a lightning discharged through the ‘Saturn V ‘ launch rocket, tripping the circuit breakers and causing a power failure in the command module. At 52 seconds, a second strike knocked out their attitude indicator. Despite these setbacks, they managed to restore the power back in a few minutes and continue their flight. The launch and overall mission was a success.

1971 :  The ‘Mariner 9’ arrived at Mars and became the first spacecraft to orbit the Red Planet. Launched on May 19, 1971 from Cape Canaveral Air Force Station, NASA’s ‘Mariner 9′ was an unmanned spacecraft carrying remote sensors, cameras, and radiometers to map the planet to better understand its geography, geology, and other features. It transmitted over 7,000 photos of the Red Planet back to Earth and was deactivated in October 1972, although it still remains in Mars’ orbit even today. The Soviet Union had also sent a space probe, the ‘Mars 2 Orbiter’, on the same day, but reached it reached on the 27th of November. This spacecraft dispatched it’s lander which unfortunately crash landed onto the Martian surface.

1973: Princess Anne, the only daughter of Queen Elizabeth II (sister of Prince Charles), married Captain Mark Phillips in Westminster Abbey, London. An interesting little tidbit is that Princess Anne’s first boyfriend was Andrew Parker Bowles, Camilla Parker Bowles’ (Duchess of Cornwall and second wife of Prince Charles) first husband. However, in 1972, the Princess Royal met commoner Mark Phillips at the Munich Olympics where he won a gold medal in a horse event. It was easy to see why they got along as the Princess herself was a keen fan of horses and had competed in a number of sporting events including the Olympics. In May 1973, the couple announced their engagement. Although, the bride would have preferred a more intimate wedding (as she told a television reporter), she was wed in a grand ceremony arriving in a horse-drawn glass carriage accompanied by her father, the Duke of Edinburgh, the same day as her brother, Prince Charles’ 25th birthday. Telecast live on TV, the wedding had an international audience of over 500 million. As was tradition, the Queen was said to have offered Mark Phillips an earldom on his wedding day, but he declined. The couples Peter Phillips and Zara Phillips are the first grandchildren of the sovereign to have no title. Unfortunately in 1989, the couple called it quits and separated and a divorce was finalized in 1992.

tagged with november 14, this day in history