This Day in History: The Final Space Shuttle Launch 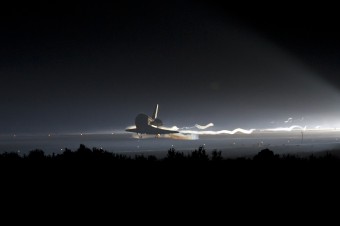 Atlantis Touching Down After Its Final Mission

On this day in history, 2011, the space shuttle Atlantis launched from the Kennedy Space Center to deliver equipment and supplies to the International Space Station.  Atlantis touched down at 5:57 AM EDT on July 21, 2011, closing 30 years and 135 missions performed by the Space Shuttles.

Throughout their run, a total of five space worthy shuttles were built, with the additional Enterprise prototype used for flight testing, but never upgraded to be able to fly in low orbit, as was initially planned (it lacked engines and did not have a heat shield, among other things).  Two of the five space worthy shuttles were destroyed in accidents (Challenger and Columbia).  The three surviving were Discovery, Atlantis, and Endeavour.

This final shuttle mission marked the 166th manned space flight mission performed by NASA and to date the last where NASA had the ability to send someone into orbit or beyond.  As Neil deGrasse Tyson said, “Apollo in 1969. Shuttle in 1981. Nothing in 2011. Our space program would look awesome to anyone living backwards through time.”