The French Word for “Paperclip” is “Trombone” 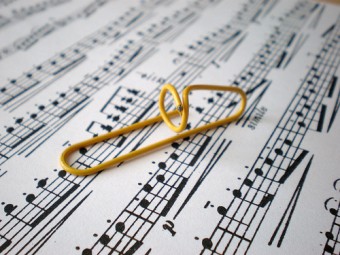 Today I found out the French word for “paperclip” is “trombone”.

The word trombone originally comes from the Italian “tromba”, which comes from the same Latin word, “tromba”, both retaining the same meaning: trumpet.  In this case, the ending with the added “one” (tromb-one), indicates “large”.  So, essentially, trombone means “large trumpet”.  This has been the name of the instrument in Italy likely since its creation, which is probably around the early 15th century.

During its early history, in English, the trombone was known as the “sackbut”, with slight spelling variations including: sacbutte, sagbut, and shagbolt, among others.  This was the case until around the 18th century when the instrument became known as a trombone in English.  This was largely due to the fact that the trombone had fallen out of favor in much of the world, including England, but was brought back into popularity thanks to the influence of Italian music throughout Europe.  During this era, the trombone combined with the cornetto and the organ to be among the most important instruments in polychoral works.

“Clip”, on the other hand, comes from the Old English “clyppan” meaning: to embrace.  Obviously this, combined with “paper” from the Latin “papyrus” (made from papyrus stalks), gave birth to the word paperclip.

Interestingly, the common style of paperclip today was never patented and is known as the “Gem paperclip”.  Not surprisingly, it is thought to have first been manufactured by the Gem Manufacturing Company around the 1870s and later introduced to the United States around the 1890s.  This is also why the Swedish word for paperclip is “gem”.

One very popular false origin of the paperclip was that it was invented by Norwegian patent office manager, Johan Vaaler.  He was even granted patents in Germany and the U.S. for a paperclip of similar design as the Gem style paperclip, but which came after the Gem paperclip was already popular throughout Europe.  His design was slightly different than the Gem paperclip in that it didn’t include the all too critical second loop that makes the Gem style much more functional.  His paperclip had the papers inserted by lifting the outer wire slightly and pushing the papers into the clip such that the rest of the clip stood out from the paper at a 90 degree angle, which was necessary because of the lack of the critical second loop to allow the papers to be more or less embedded in the clip flatly.  This also made it so the papers wouldn’t be held together very well as they relied only on how bendable the wire used was to hold the papers. The Gem style paperclip, on the other hand, exploits the torsion principle to help bind papers together. Vaaler’s design was never manufactured or sold and his patents eventually expired.

Why Vaaler gets the credit in so many places, including in many encyclopedias and dictionaries after the 1950s, is largely thanks to a patent agency worker who was visiting Germany to register Norwegian patents in the 1920s.  When he was doing so, he noticed Vaaler’s design for the paperclip and wrote an article stating Vaaler was the original creator of the paperclip.

This misinformation found its way into encyclopedias around the 1950s thanks to WWII.  During WWII in Norway particularly, along with France and some other occupied countries, the paperclip became a symbol of unity for those rebelling against the Germans.  It is not thought that the Norwegians did this because they thought a Norwegian had invented the paperclip, but rather because it simply signified being bound together and was useful as it wasn’t initially a banned symbol or item by the Germans and could be easily clipped to one’s clothing.  Eventually, the Germans caught on and people were prohibited from wearing paperclips.