Pasta Is Not Originally from Italy 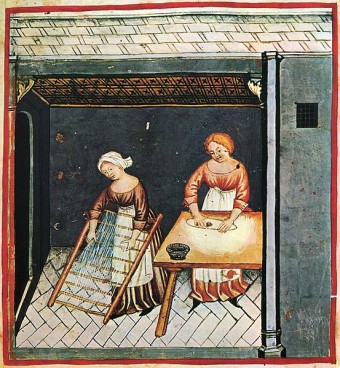 Worldwide, pasta has become synonymous with Italian cuisine. Italian immigrants themselves brought pasta everywhere they went. While it is true that the most famous varieties and recipes of cooking pasta really do come from Italy, surprisingly, the actual origin of pasta lies elsewhere!

So how did pasta make its way to Italy? One of the more popular theories was published in the ‘Macaroni Journal’ by the Association of Food Industries. It states that pasta was brought to Italy by Marco Polo via China. Polo ventured to China in the time of the Yuan Dynasty (1271-1368) and the Chinese had been consuming noodles as early as 3000 B.C. in the Qinghai province. There is even some evidence there of 4,000-year-old noodles made from foxtail and broomcorn millet.

Unfortunately, there are problems with this theory, least of which is that the noodles they were making in China aren’t technically considered pasta. Polo also described Chinese noodles as being like “lagana”, which implies he was possibly already familiar with a pasta-like food before going to China. Further, in 1279, there was a Genoese soldier that listed in the inventory of his estate a basket of dried pasta. Polo didn’t come back from China until 1295. For those who don’t know, Genoa is a sea port in Italy. Further, the modern pasta like we know it was first described in 1154 by an Arab geographer, Idrisi, as being common in Sicily. So Marco Polo could not have brought pasta to Italy via China. It was already in Italy at that time.

So how did it get there? Most food historians believe that Arabs (specifically from Libya) are to be credited for bringing pasta, along with spinach, eggplant and sugar cane, to the Mediterranean basin. In the Talmud, written in Aramaic in the 5th century AD, there is a reference to pasta being cooked by boiling. It is thought, then, that pasta was introduced to Italy during the Arab conquests of Sicily in the 9th century AD, which had the interesting side effect of drastically influencing the region’s cuisine. It also known that by the 12th century, the Italians had learned from the Arabs methods for drying pasta to preserve it while traveling. Further support for this theory can be found by the fact that, in many old Sicilian pasta recipes, there are Arab gastronomic introductions.