There is a Protozoa that has Seven Sexes 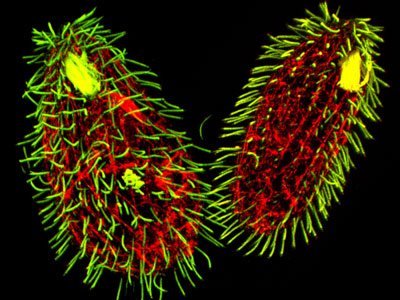 Today I found out that there is a protozoa that has seven sexes.

This organism is known as Tetrahymena thermophila.  They are species of ciliate protozoa, common in fresh-water. They are also known for being widely used in genetic and cytological research as model organisms.

The seven sexes of Tetrahymena thermophila are somewhat uninventively named I, II, III, IV, V, VI, VII and aren’t evenly distributed within a population thanks to the peculiar way each individual’s sex is determined. Unlike with say, humans, the genotypes of Tetrahymena thermophila don’t determine what sex they are, rather just provide probabilities of developing into a certain sex. These probabilities are influenced partly by genetics and partly by surrounding temperatures.

What scientists are still scratching their heads about is the reason why any species would develop to have seven sexes. The leading theory is that perhaps it gives somewhat of an advantage over a typical two sexed system of procreation in that any one sex can successfully mate with any other sex but its own.  Thus, having many sexes increases the odds significantly that one Tetrahymena thermophila will encounter another Tetrahymena thermophila that it can successfully mate with.