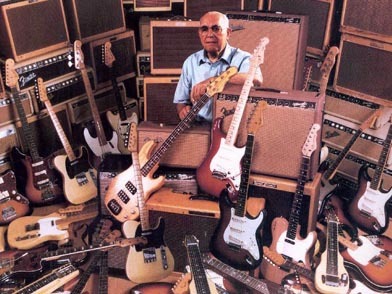 Today I found out Leo Fender, inventor of  one of the most popular electric guitar brands in the world, Fender Guitars, never learned how to play guitar.  In addition to that, he actually was an accountant before losing his job in the Great Depression.  When he lost his job, he decided to turn his hobby of tinkering with electronics, radios, amplifiers, and the like, into a business, “Fender Radio and Record Shop”, which eventually led to what is now known as the “Fender Musical Instruments Corporation” and the creation of his now famous guitars and amplifiers.

Despite designing the first commercially successful solid-body electric guitar, the Telecaster, and the most influential of all electric guitars, the Stratocaster, and inventing the solid-body electric bass guitar, the Precision bass, Clarence Leonidas “Leo” Fender was an engineer, not a musician and he couldn’t himself play a lick of guitar!  As such, he had to bring in musicians to properly test out the prototypes of his guitars.

Fender’s fascination with electronics started when he was 14 years old. His uncle had built a radio from spare parts and the loud music coming from the speaker impressed Leo. Later, repairing radios became a hobby for Fender.

During his college years, Fender studied to be an accountant while continuing to teach himself electronics as a hobby, never taking any electronics courses while in college. For quite some time after graduating, Fender worked as an accountant. After losing his job due to the Great Depression, he opened the Fender Radio and Record Shop in Fullerton, CA where he was able to combine his love of music and tinkering with electronics. Part of the service he offered at his shop was amplifier repair. This eventually led to Fender designing and building his own amplifier and he also eventually was hired to design a PA system which would be specialized for use at dances, which had particular requirements of eliminating the usual feedback that usually occurred in existing systems used in such small spaces like school gyms and the like.

For years, Fender then tinkered with different sound products and felt that he could design his own steel guitar and amplifier lines. With this thought in mind, he convinced Clayton Orr “Doc” Kauffman, an inventor and lap steel guitar player, to start with him “K & F Manufacturing Corporation”, which would design and build electric Hawaiian guitars and amplifiers. Fender began to design steel guitars that rested in the musician’s lap while being played with a metal slide. In 1944, Leo and Doc patented a lap steel guitar that had a special electric pickup also patented by Fender with their first steel guitars sold in a kit with an amplifier. Fender’s guitar “Broadcaster” was then steadily improved over several years to become a Telecaster, which in turn led to “The Esquire Model” in 1950, the first six string one pickup Fender guitar.

Fenders designs helped turn electric guitars, which weren’t very popular at the time, into the dominate type of guitar used by performing artists. His Telecaster design particularly has seen only a few changes even during the decades that have followed. The ultimate goal for Fender was to create an electric guitar which would have no feed-back, even in small settings, and which would be easy to play and to tune.