South African Earthworms Can Grow as Large as 22 Feet Long 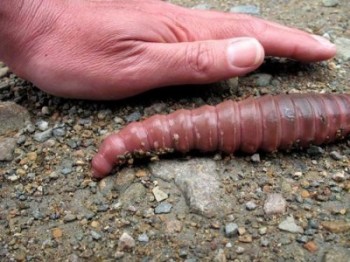 Today I found out South African earthworms can grow as large as 22 feet long, with the average length being about 6 feet long.  The largest one ever found so far, being 22 feet long, was found on a road side in 1967.

Other varieties of large earthworms include the Giant Gippsland earthworm of Australia, which grows about 3 feet long, but can stretch up to 12 feet and weigh as much as 1.5 pounds.  These almost never surface. However, on Australian farms that have this worm, you can hear gurgling sounds coming from the ground as they move through the soil, processing about 1/2 to 1 times their body weight in dead organic material per day.

There also used to be a variety of earthworm in Washington State that grew to an average length of two feet long, but this type of worm hasn’t been spotted since 1978.  Just south of Washington, in Oregon, there is a species of earthworm that grows to about 3 feet long and, if you handle it, will give off a strong smell of lilies.  It has not been spotted since around 1980.

Another fascinating earthworm is a variety found in New Zealand, the North Auckland Worm, which typically grows about 4-5 feet long and glows; with several of them around, you’ll supposedly have enough light to read by in the dark.