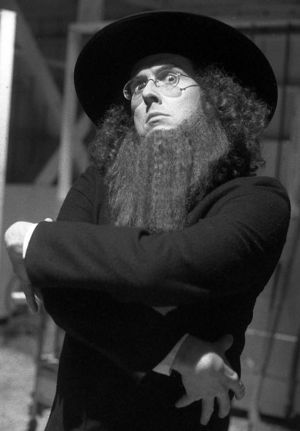 Today I found out Weird Al Yankovic was the valedictorian of his class at Lynwood High School, which is just outside of Los Angeles.

In addition to this, he graduated high school at just 16 years old.  He was able to do so because his parents had him attend kindergarten a year earlier than is typical.  After performing well academically in kindergarten and the first grade, he then was allowed to skip second grade, which ultimately put him about two years ahead of most kids his age in school. He went on to be a straight-A student throughout high school, which eventually culminated in him becoming the valedictorian of his class.

It was during high school when he also submitted home-made recordings to Dr. Demento, which were tapes of Weird Al performing various parodies of songs, accompanied with his accordion.  Dr. Demento would occasionally put some of Weird Al’s songs on the air, such as “Belvedere Cruisin”, which was one of his more popular “high school years” songs.

Yankovic did not, however, go into professionally performing right out of high school.  Instead, he attended the California Polytechnic State University and earned a degree in architecture.   However, while at college, he did have a radio show and continued to write and publish parody songs on the side, including his first hit “My Bologna”, parodying “My Sharona”, which was actually recorded in a men’s bathroom at the university.

The lead singer of The Knack, Doug Fieger, eventually heard “My Bologna” on the radio and convinced his label to sign Yankovic to a contract.  In thanks, Yankovic bought Fieger an over-sized bologna.