Swimming Within an Hour After Eating is Not Dangerous 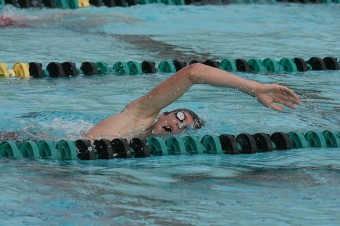 Myth: Swimming within an hour (sometimes stated 30 minutes) after eating is dangerous and can cause you to cramp up and drown.

It is believed by many that you should not swim for at least an hour after eating, as it could be dangerous. This old wives tale has been told to kids around the world and has become more or less a popular rule of swimming safety. Children in Cuba are even told not to swim for up to three hours after a meal! The reasoning behind this myth is often stated to be that there is a possibility of severe muscle cramping when you swim on a full stomach and a risk of drowning because of it. But is swimming directly after eating actually dangerous? It turns out, it is not at all.

Similar to when exercising where your body requires greater blood flow to your limbs, food digestion requires greater blood flow to the stomach to help in the process of breaking down the foods. This is why it is believed that digestion would divert the circulation of blood toward the gut and, to some extent, away from the muscles, which could cause cramping. The truth is though that we have enough blood to keep all of our parts supplied and most experts doubt that a full stomach could be the cause of cramps, should they occur while swimming, which of course is not that uncommon, whether you eat or not before swimming.

More to the point, not a single episode of drowning caused by swimming on a full stomach has ever been documented. Further, even if cramps do occur while swimming, which is common enough without eating, all a person has to do is not panic and they’ll be fine. Most cramps don’t last very long and the human body naturally floats; so the recipe for not drowning while experiencing cramping is just to stay calm and float it out.

On top of that, few people, when choosing between drowning or continuing to swim with a painful cramp, will choose drowning, unless they panic. So even if the experts are wrong and eating on a full stomach can increase the likelihood of cramping, the person who’s decided to eat and swim only need be told or remember not to panic, and to simply float until the cramp goes away. Considering that cramps are fairly common when swimming anyways, most people have probably learned to deal with this in any event. So even in the case of the experts being wrong about there being no connection between eating and cramping, there is no real increase in danger here.

As far as the widespread belief that eating causes cramps, despite scientific evidence that states otherwise, this is just a clear instance of confirmation bias, where someone will eat and swim, then have a cramp and determine it’s because of eating. Later, when they think back on these instances, they only remember the times when they got a cramp after doing this set of actions and not all the other times when they didn’t nor do they correlate the number of times they got cramps after eating and swimming with the number of times they got cramps after not eating and swimming, which they’d find are shockingly similar percentages over a large enough sample size. But because people don’t think like that and are naturally prone to confirmation bias, these instances of cramping or often stories they hear of someone drowning after eating then swimming just confirms the myth in their minds, even in the face of contrary evidence. Then, naturally, as they don’t want their own kids to drown, they pass this little myth on to the next generation.

So while swimming, as with doing any exercise after a big meal, might not be the most comfortable of things to do, particularly for out of shape adults, there is zero evidence that it is inherently dangerous.