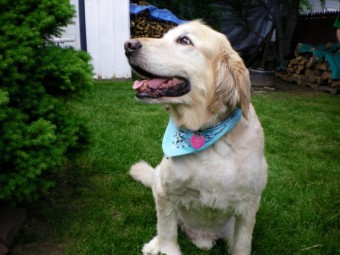 There is a popular belief that dogs age seven years for each calendar year because the lifespan of a dog is about one seventh in duration to a human’s average lifespan. So a two year old dog corresponds to a fourteen year old human teenager in the terms of this aging processes.

This model, however, is completley incorrect. In fact, determining the exact age of a particular dog, relative to a human scale, is much more complex than that with the ratio of dog years to human years varying with the weight, breed, and health condition of the dog.

Canine aging is much more rapid during the first two years of a dog’s life relative to the first fourteen years of a human’s life. It turns out, for many breeds, the first year of a dog’s life is equal to about 14-15 human years. Later, depending on the dog`s size in pounds typical for its breed, the same number of actual years corresponds to different number of human years, with this scale varying greatly from breed to breed.

There are four main groups of dogs each having a different ratio of translating dog years to human years: small dogs (20 pounds or less), medium dogs (21-50 pounds), large dogs (51-90 pounds) and giant breeds (more than 90 pounds). Large dogs mature more slowly but at the age of five they will be considered elderly, while small and toy breeds are not considered seniors until the age of ten.

So the bottom line is, the old thumb rule that one dog year equals seven years of a human life is not at all accurate. The ratio is higher during first years of the dog’s life and decreases as the dog ages.