January 3, 2011 Jon
Note: This is a guest article contributed by frequent TIFO visitor and owner of DumpADay, Jon. 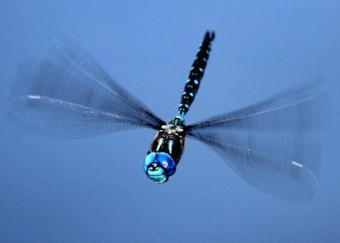 Today I found out that the dragonfly can fly up to 60 miles per hour, which makes it the fastest insect on the planet.

Interestingly, dragonflies only have their wings for about 3 to 4 weeks of their lifespan.  Dragonflies lay their eggs in small ponds or other bodies of water and spend most of their lives in the larva stage (up to 3 years, depending on the species). It’s not until they go through a metamorphosis process that they grow wings. So when you see a dragonfly with wings, you know his days are numbered.

As young dragonflies, they feature a special appendage on their heads that they use to spear small fish or larva, making them predatory insects practically from birth. In the adult stage, (or winged stage), when you see two dragonflies chasing each other, it’s often two males, as the males are known to be territorial.  When you see two dragonflies stuck together while flying…    Well that one is pretty obvious, let’s just say, love is in the air.

Being an insect that can fly 60 miles per hour (97 km/hr) and being able to see 360 degrees at all times, there aren’t a lot of natural predators around that can catch the dragonfly; however, there are some.  Among those are frogs, which use a quick flick of their tongue to catch the tasty protein filled snack.   Many types of frogs can flip their tongues out and back in less than 15/100ths of a second, which is faster than most eyes in nature can follow movement, let alone escape from.