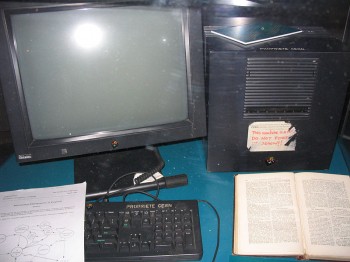 The First Ever Machine to Run a Web Server

Today I found out what the first website ever made was.  Simply put, it was a website made by the World Wide Web’s creator Tim Berners-Lee, who was working for CERN (European Organization for Nuclear Research).

This link is no longer active and, unfortunately, nobody bothered to make a copy of this original page, which tended to be updated daily anyways.  The earliest version of it that was recorded was in 1992 and a copy of that page can be found here.

The first ever web browser, called WorldWideWeb, was also created by Tim Berners-Lee.  This browser had a nice graphical user interface; allowed for multiple fonts and font sizes; allowed for downloading and displaying images, sounds, animations, movies, etc.; and had the ability to let users edit the web pages being viewed in order to promote collaboration of information.  However, this browser only ran on NeXT Step’s OS, which most people didn’t have because of the high cost of these systems (this company was owned by Steve Jobs, so you can imagine the cost bloat ;-)).

In order to provide a browser anyone could use, the next browser he developed was much simpler and, thus, versions of it could be quickly developed to be able to run on just about any computer, pretty much regardless of processing power or operating system.  It was a bare-bones inline browser (command line / text only), which didn’t have most of the features of his original browser, but at least could be used on pretty much any computer out there at the time and allowed people to access the information on the web.

The first web server was also written by Tim Berners-Lee called CERN HTTPd, the latter part standing for “Hypertext Transfer Protocol daemon”.   For those not familiar, a daemon is simply a program that more or less runs in the background on a system doing whatever it is programmed to do; in this case, listening for and responding to requests for web pages that exist on the machine it is running on; thus this daemon would be called a “server”.