How an LED Works 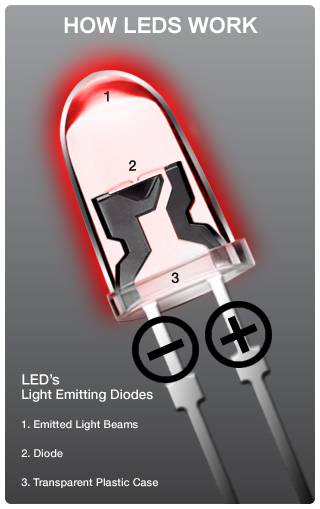 Today I found out how an LED works.  An LED or “Light Emitting Diode” is basically as the name describes; it is a special type of diode that is specifically optimized to give off light, usually in the visual or infrared spectrum, as electricity is passed through it.

A diode is a special type of semiconductor that has many uses.  One of the principle uses though is to control the direction of the flow of electricity.  The most common type of diode does this by using something called “p-n junctions”.  This is just a fancy way of saying “magic”. 😉

Really though, in simple terms, think of a Dr. Pepper can divided in the middle.  On one half you have made a semiconductive material that you’ve added impurities to so that it contains negatively charged carriers; basically an abundance of electrons. We then call this side an “n-type semiconductor”.  On the other half you’ve done the same thing, except you’ve introduced impurities that contain positively charged carriers; basically think of it like a bunch of holes that need filled by electrons.  We call this side a “p-type semiconductor”.

So we have on one side an n-type semiconductor and on the other side a p-type semiconductor.  The boundary between these two is called the “p-n junction”.  This is where all the magic happens.  It turns out that conventional current will travel from one side to the other, but doesn’t like to go in the opposite direction.  So you can use this to make sure electricity only flows in the direction you want it to in your circuit (among a lot of other things; seriously diodes are crazy useful in a variety of ways and various specialized diodes can do some other interesting things, which I won’t go into in this article, but will probably revisit at some point.  Generally speaking, these p-n junctions are at the heart of almost all semiconductor electronic devices).

So how are these diodes modified to produce light?  Well it turns out they don’t really need to be modified at all to produce a form of light radiation.  However, standard diodes tend to be made of materials that absorb most of the light radiation given off and more importantly tend not to give off the light in human-visible form anyways.

What’s going on here is, as the electricity jumps across the p-n junction,  the electrons from the “n-type” side “fill holes” in the “p-type” side.  During this process, the electrons end up changing their state. During this state change, a photon is emitted.   More specifically what is going on is, as electrons move around orbiting a nucleus of an atom, electrons with different orbits have different amounts of energy.  Electrons with orbits farther away from the nucleus have greater energy and ones closer have less energy. 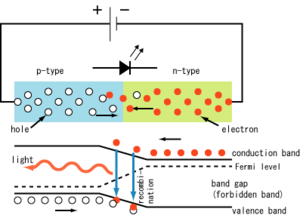 So in order for an electron to change its orbit, it needs to either lose energy or gain energy.  What we are interested in with LEDs are the electrons going from a higher orbit to a lower orbit, thus losing energy in the form of a photon of light.  When the electrons from the n-type side “fill the holes” in the p-type side, they then lose energy in the form of these light photons.  The greater the energy release, the higher the frequency the light photon given off, thus changing the color.

If the frequency ends up being in the human visible spectrum (the range your eyes can see), then you’ll see the light being given off by the LED.  If not, such as when given off in the infrared spectrum, then you won’t see it. But it can still be useful, such as in allowing you to change the channel on your TV (infrared LEDs are typically used in your TV remote control among many other places).  When you press a button on your remote, you don’t see the light, but the receiver on your TV can see it and can interpret what it’s seeing from the infrared LED.

In LEDs, the light that ends up being created depends then on the material being used and the current that is run through it.  The light in a standard diode has the atoms arranged so that the electron drop in energy is very short and thus the frequency of light given off isn’t visible to our eyes, rather is in the infrared.  So simply put, LEDs where you can see the light are made of semiconductor materials that create a bigger drop in the electron’s orbit so that the frequency of the photon packet comes out in the human visual spectrum.  They can even be designed so that the amount of electricity flowing through them will actually change the drop and so you can have a multi-color LED.