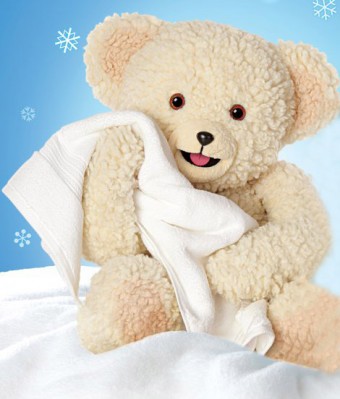 Today I found out how anti-static dryer sheets work.

There are two primary methods used to get rid of static charge buildup in drying clothing, which happily go hand in hand with one another using the same substance.  The first method is to lubricate the clothing.  The second method is to use a positively charged material to more or less balance out the charges on the tumbling clothing.  Because fabric softeners are typically naturally positively charged and provide a lubricating effect after they coat the clothing, they make a fantastic anti-static agent, along with performing their softening function.

Static charge is built up in the clothing in the dryer via the triboelectric effect.  The triboelectric effect is where certain materials become electrically charged when they come in contact with one another and then are separated (rubbing isn’t required, but will enhance the effect significantly).

When the two materials come in contact, a chemical bond is formed and if there is an electrical potential difference, electrons will move from one material to the other until the potential is equal.  However, when the bond is broken, certain atoms will keep more electrons than they should and other types of atoms have a tendency to give away more atoms than they should upon being separated.  So, when these two get together and then are separated, an imbalance is formed, which ultimately results in static charge buildup.

When the materials are rubbed together, such as in a dryer, this bonding and breaking of the bond happens many times, which increases the charge potential significantly (with static buildup being measured as high as 12,000 volts from clothing coming out of a dryer).  Examples of materials where the triboelectric effect can be readily observed are: amber in contact then separated with wool; glass with silk; rubber with hair; and, most relevant to this article, cotton with polyester.

By lubricating the clothing, friction is significantly reduced, which reduces the bonding/separating frequency that is causing the static charge to build up.  Thus, dryer sheets are typically impregnated with a heat activated, waxy substance which works as a fabric softener and coats the clothing with a very thin layer of lubrication, reducing friction and static charge buildup.

These fabric softeners are also typically positively charged (cationic).  This causes them to bind to the negatively charged fibers, effectively neutralizing their charge, which in turn causes the positively charged fabrics to not cling to them as well.  Basically, this reduces the potential difference, which causes the two materials to be closer on the triboelectric spread, which makes it so your clothes can’t build up much of any static charge, so they don’t suffer from “static cling”.

One problem this introduces is that, over time, the fabric softener builds up on the fibers thanks to this positive/negative charge effect and the fibers become less and less able to absorb water, making them harder to really get clean and making them less absorbent, which can obviously be a bad thing in the case of towels or the like.

If you don’t feel like using a fabric softener, which is particularly not needed with 100% cotton items which will naturally soften as they are washed more and more, simply don’t mix fiber types when you do your laundry.  If you wash all cotton items with only other cotton items and all 100% polyester items with only other 100% polyester items, this avoids the triboelectric effect that occurs between these two materials, effectively eliminating the potential charge build.