NASA Uses the Movie Armageddon in Their Management Training Program 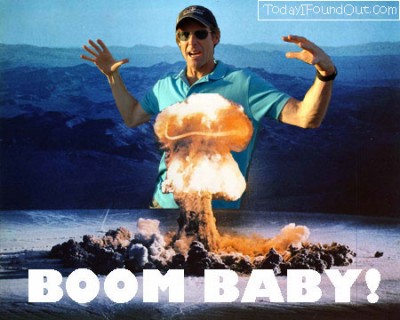 Today I found out that NASA uses the 1998 film, Armageddon, in their management training program.

It turns out, to absolutely no one’s surprise, that this is not because it’s an incredibly well thought out movie in how to stop an asteroid from hitting the earth…  No, they use it because it contains over 168 distinct things that are impossible (not just improbable, but impossible.  there are many many more if you want to talk about improbable).  Because of this, it makes for a great exercise in seeing how many of those things their staff can recognize, both the impossible things and the improbable.

Now personally, I’m not one to criticize a film for having scientific inaccuracies, so long as they are entertaining.  I mean, that’s the point of movies right?  If a film maker wants to make true “art”, they’ll be sure and always stay consistent with the world they create and things of this nature, but in most cases, they are just looking to entertain and make a lot of money.

That being said, in this case, I’m willing to make an exception due to the amazing number of inaccuracies (168 impossibilities in 150 minutes of film, averaging over 1 per minute; that’s not even talking about the improbables;  just the impossibles) and the fact that it’s a film based in space and about things happening in space.  So it would stand to reason that some part of the plot should actually have something to do with something that could actually happen in space.  I mean, it would be like taking the movie Sleepless in Seattle and randomly having it based in South Africa, then have gravity pull upward instead of down, then instead of breathing air everybody breaths cotton candy, then add about 165 more things just like that randomly and  never address in the plot why any of these things might be the case in this world the writers and directors have created.

Phil Plait said it best “Here’s the short version: Armageddon got some astronomy right. For example, there is an asteroid in the movie, and asteroids do indeed exist. And then there was… um… well, you know… um. Okay, so that was about all they got right.”

The other head scratcher is that many of the impossibilities introduced weren’t necessary in regards to the plot.  So they actually intentionally injected these additional impossibilities into the story for no reason other than to make the film longer and possible to introduce more explosions… in space.  They just added minutes and cost to an already too long film.  This implies a lack of effort on the part of Michael Bay in actually developing the script.  Now granted, it is Michael Bay.  I imagine his script writing sessions tend to go something like:

But really Michael Bay?  Really?  You couldn’t have hired a Physics Grad Student from Berkeley for $15 an hour to do a read through of the script and give you some feedback?  Quite a lot of those impossibilities could easily have been worked around or removed from the script and still kept the main thrust of the story.  Then, instead of having a movie that is essentially just a lot of stuff blowing up… in space… for about 2 and a half hours, you might have actually made a quality film. *gets off soap box*

But again, I always have to give props to people who can do something really poorly or stupidly and still make a bagillion dollars off it and in this case it’s doubly impressive because he’s managed to do it about 7 times with two up coming movies that look pretty much like they’re going to make lucky numbers 8 and 9 on that list.  So thumbs up to you Mr. Bay.  There is nobody better at making films that are pretty much 99% about stuff randomly blowing up and pretty much on the strength of that central “plot” alone, making a ton of money off it… over and over again.